Golden State Warriors To Play In Games Without Fans In Attendance After City Of San Francisco Bans Gatherings Of Over 1,000 People 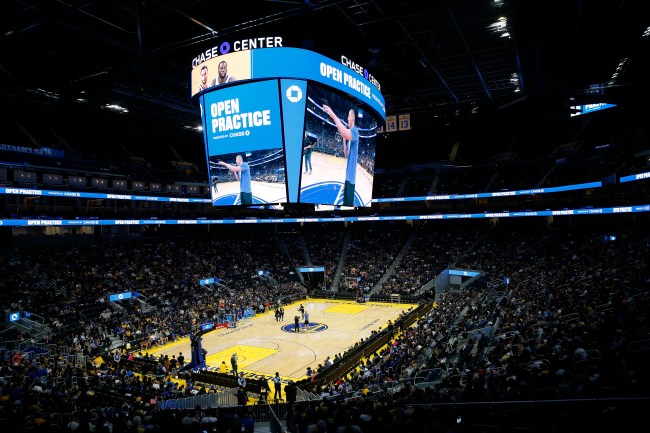 The NBA is going to have to make a decision real soon about having the Golden State Warriors play home games without fans in attendance or having the team play in another city due TO coronavirus concerns.

On Wednesday, the city of San Francisco banned large gatherings of over 1,000 people which will include Warriors games.

San Francisco is banning gatherings of more than 1,000 people, including Warriors games.

The ban is for two weeks. Given that the Warriors has a five-game road trip during that time, they'll only have to figure out what to do for two home games at the moment: tomorrow's Nets game and the March 25 game against the Hawks. https://t.co/mBb1ymNMo9

The NBA is currently discussing playing games at neutral sites or having games without fans in attendance considering more cities may put in restrictions on large gatherings.

As the NBA’s board of governors prepares to confer with the commissioner’s office Wednesday in a critical conference call on the coronavirus crisis, one scenario introduced into the league’s conversation involves moving some games to NBA cities that have yet to suffer outbreaks, league sources told ESPN.

If the virus clusters and forces a team out of its city and arena for a period of time, there has been discussion about moving games to the away opponent’s arena if that city hasn’t suffered an outbreak — or even moving games to neutral cities and sites, league sources told ESPN.

The NBA is discussing a number of possibilities — including eliminating fans from buildings for games or, more drastically, suspending game operations for a period of time — but sources said decisions on those options remain complicated by the fact that there has been a limited amount of public testing for the coronavirus in the United States. There is no full understanding of how widespread and debilitating the virus could become in the country.

The NBA is stuck between a rock and hard place but has yet to come up with a solution so far. We’ll update this post whenever the NBA makes an official comment.

Update: The Warriors plan to play in the Chase Center on Thursday in a game close to fans.

The Warriors, league sources say, will be directed to play host to the Nets on Thursday night at Chase Center in a game CLOSED to fans

Warriors stil meeting on the matter and further direction could come from league owner’s call this afternoon, per sources. For now, the Chase Center is expected to be empty for game vs. Brooklyn on Thursday. Warriors are away until March 25th, so that buys them time at Chase. https://t.co/52xXvFXSaw

Due to escalating concerns about the spread of the coronavirus, and in consultation with the City and County of San Francisco, tomorrow night’s game vs. the Nets at Chase Center will be played without fans. Fans with tickets to this game will receive a refund in the amount paid. pic.twitter.com/DMpO71ocvg