C.J. Anderson Opens Up About Todd Gurley’s Lack Of Production In The Super Bowl 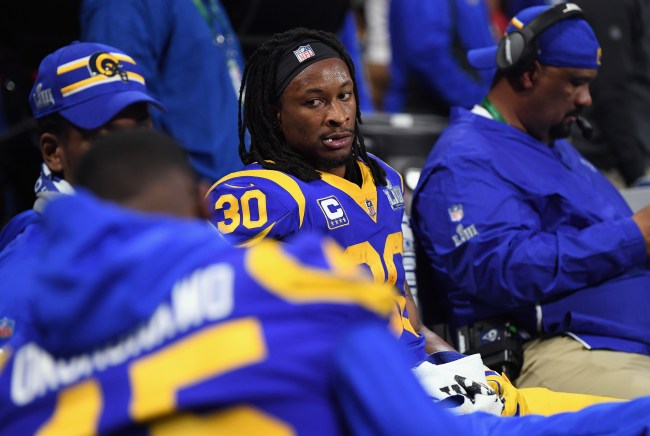 One of the most lethal offensive threats in the game was largely ineffective in the biggest game of his life and it appears that the nagging knee injury that kept him out during the last game of the regular season was worse than everyone thought.

C.J. Anderson, the back that the Rams signed in the wake of Gurley’s injury, appeared on Fox Sports 1’s “Undisputed” on Tuesday to discuss why Los Angeles’ workhorse was held to the production of a mini pony used in children’s birthday parties.

“He was more hurt than what we thought,” Anderson replied. “The injury was a little bit more than what everybody in the building thought, including himself.”

Bayless asked if he’d call it a “sprained knee,” and while Anderson said Gurley didn’t tell him exactly what the injury was, he indicated that’s what it was.

“Yeah, he’d never really tell me. It was tough. I would say sprained knee,” Anderson said. “Obviously, it’s the same knee injury he’s had before in his career. Obviously I had surgery on my meniscus and once you have a knee, you always have a knee. So it aggravates and if he was getting a lot of touches earlier in the year — obviously him being one of the best backs, that probably was the case.”

Sean McVay called Gurley’s injury “knee inflammation,” which is consistent with the immense workload the 24-year-old has shouldered (knee-d?) over the past two seasons. Gurley has the most touches in the NFL since the start of 2017, and one has to wonder how much a man can take for a sustained period of time.