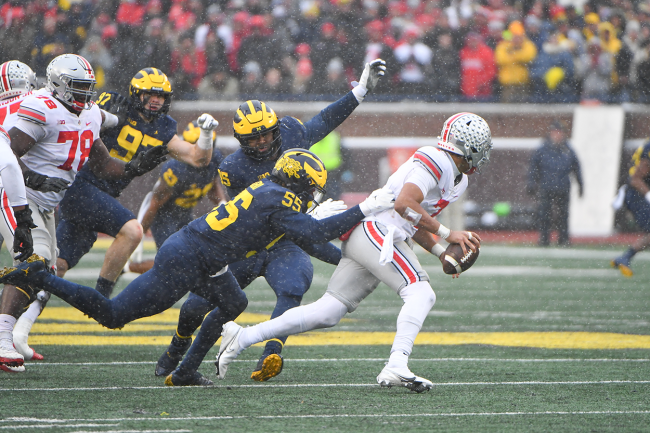 When THE Ohio State University squared off against Michigan in the final week of the regular season, things did not go well for the Buckeyes. The Wolverines won 42-27 in the snow, advanced to the Big Ten Championship, and set themselves up for the College Football Playoff.

However, many of the Buckeyes were not at full health. In the week leading up to The Game, a significant chunk of the roster was dealing with the flu.

Among the sick was starting quarterback and Heisman Trophy finalist C.J. Stroud. Despite the ailment, Stroud went 34-of-49 for 394 yards and two touchdowns.

C.J. Stroud says "I'm not making excuses," but that many of the Buckeyes having the flu for the Michigan game "kind of does matter."

This isn’t to say that Stroud is wrong. When a large number of teammates are dealing with a bug, it takes a massive toll on the team. It very easily could have been the difference between winning and losing at The Big House.

However, the game was almost two weeks ago now and Stroud said he doesn’t make excuses.

“When you take into consideration what we’re going through that week, preparing for the team up north and everybody kind of having the flu and things like that – of course I don’t make excuses – but you kind of got to take that into consideration. It kind of does matter. I’ll take Ohio State, I’ll take my brothers against anybody.”

Immediately saying “but” after saying that you don’t make excuses is a direct contradition.

After the game against the Wolverines, Stroud confirmed that he was sick and that it cost him his voice. He attributed several of Ohio State’s false start penalties and snap miscues to his lack of voice.

It’s a very fair claim and a very understandable thing to have happen, but it’s still an excuse. Stroud says he doesn’t make excuses.

During his press conference on Wednesday, the Heisman candidate said that the illness impacted more than just him. Again, that makes it very difficult, but to share that information at all, is an excuse.

“It was bad. We already knew throughout the week, dudes were dropping out, missing practice,” he said. “It was kind of bad, it was just the feeling of the flu. I had it myself, but I’m feeling a lot better now.”

In addition to the flu, the temperatures at the game were sub-freezing. The combination of the two makes success just that much more difficult.

“I don’t think it affected the game plan. I feel like right when I got out there I felt fine, I didn’t really notice my sickness messing with me, but I feel like it does slow you down,” Stroud said. “It does kind of make you tired in a sense. Some of those drives I came off the field really tired, more than usual. It could’ve been the cold, I don’t know. There’s a lot of things that could’ve happened, man. At the end of the day, we lost.”

Could things have gone differently if Stroud and the rest of his team was at full health? Perhaps.

But to bring up the flu more than 10 days after a loss, goes against what Stroud says he doesn’t do— make excuses.

If you’re going to share such information, share it. It’s an important insight. Just don’t say that you don’t make excuses before making an excuse.