WATCH: Olympic Swimmer Is Complimented On His ‘Third Leg,’ Fights To Hold Back Laughter 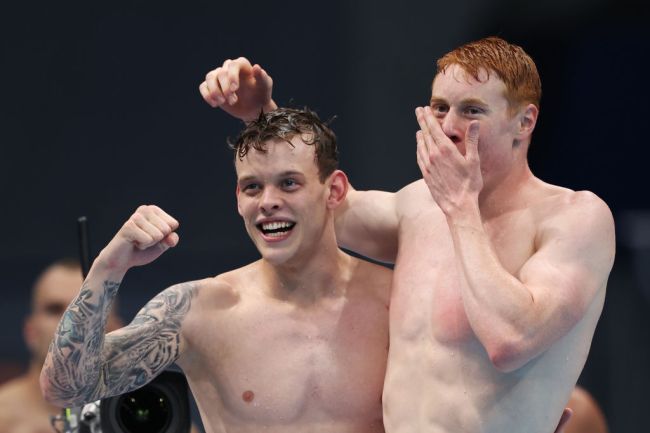 Team Great Britain topped the men’s 4x200m freestyle relay at the Olympics to secure the nation’s third swimming gold on Wednesday. After the race finished, BBC Sport broadcaster Clare Balding commented on the team’s tremendous ‘third leg,’ and the swimmers did everything they could not to laugh.

The United States strangely decided to lead top freestyle swimmer Caeleb Dressel off of the 4x200m team and did not medal for the first time in the event. Meanwhile, Team GB set a new European record of 6:58.58.

Tom Dean is one of the more well-known swimmers from the country and won the 200m individual event. His teammate Duncan Scott finished with silver in the individual race and swam the anchor leg of the relay.

However, it was James Guy and Matthew Richards who really separated Great Britain from the field in legs two and three. Richards, who is only 18, joined Dean in the post-race interview.

As Richards received praise for his ‘third leg’ both swimmers smiled.

The entire sequence is hilarious but it is Dean’s very strong battle against laughter that takes it over the top. His dimples are forced to work overtime as he stifles a laugh.

Richards, who’s third leg was “just phenomenal,” cracks an initial smile but is able to push through the interview.