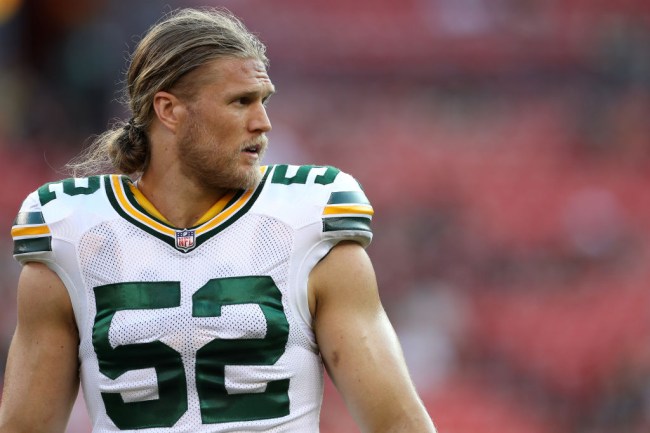 Early in the game, Matthews took a line drive off the bat of Packers o-lineman Lucas Patrick straight to the face and appeared to be a bit shaken up as he made his way to the dug out.

Clay Matthews just took a Lucas Patrick line drive right to his face. He walked off immediately, covering his face in a towel.

He went straight to the club house and we’ve got a temporary pause of play at the Green & Gold Charity Softball Game. #Packers

Davante Adams comes out of the dugout wearing Clay Matthews’ softball jersey, as the umps explain the new safety measure they’re going to try here for pitchers. Adams is his team’s pitcher. #Packers

Davante Adams updates the crowd on Clay Matthews: “I wanted to let everybody know Clay is all right. He’s got a little boo-boo on his nose, but he’ll be all right. He’s a tough guy.” #Packers

It’s safe to say Mattthews is never going to play softball ever again. Let’s just hope he’s ok and that he didn’t suffer a broken nose or anything serious.

Update: Matthews is being taken to the ER to get checked on.

#Packers LB Clay Matthews is headed to the ER after being hit by a line drive in a charity softball game. The belief now is it’s just a broken nose, but he’s having a full workup to be sure. Scary situation, and if it’s just the nose, it could have been much worse.