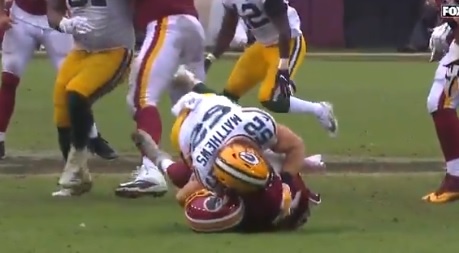 For the third week in a row, Clay Matthews was flagged for another controversial roughing the passer in the Packers game against the Redskins.

No way this is roughing the passer. Terrible call. pic.twitter.com/WUqPoWqxMd

This is a foul for roughing the passer – the defender lands “with all or most of the defender’s weight” on the passer. Rule 12, Section 2, Article 9(b): https://t.co/s9YKN8NLuT #GBvsWAS pic.twitter.com/ei2QZkvvzx

Packers coach Mike McCarthy was clearly not happy with the call as he ripped the refs on the field and also took shots at the rule during the team’s postgame press conference.

“In Clay’s particular case, I thought Clay did exactly what he was supposed to do there,” McCarthy told reporters after the game. “So how it’s being officiated, those are questions for other people. He hit him with his shoulder. He’s coming full speed off of the block. He braced himself. I was fine with what Clay did.”

Obviously I don’t agree wit it again. I understand the spirit of the rule but when you have a hit like that, That’s a football play … Unfortunately the league is going in a direction that a lot of people don’t like. You know I think they’re getting soft, the only thing they do hard is levy fines on guys like me who play the game hard.