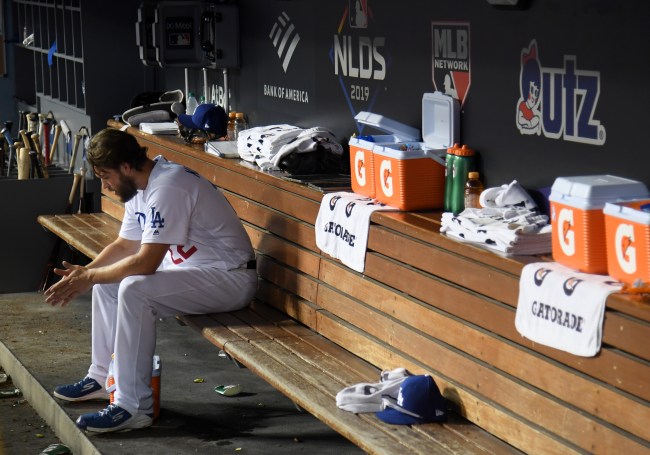 If you’re having a bad day, gain some perspective by putting yourself in Clayton Kershaw’s cleats.

The three-time Cy Young winner confirmed the belief that he cannot produce in the postseason after egregiously blowing a Dodgers 3-1 lead to the Nationals in the top of the eighth of the National League Division Series.

Kershaw came in the game in relief to face Anthony Rendon and Juan Soto. Three pitches and two homers later (including a 449 foot moonshot by Soto to right-center), the score was tied at 3. A grand slam in the 10th inning and a 7-3 Dodgers loss would cement Kershaw’s performance as one of the great choke jobs since Buckner let a dribbler through his legs.

…down by 1 in the 8th inning of a do-or-die Game 5 on the road at Dodger Stadium.#ChildishBambino // #STAYINTHEFIGHT pic.twitter.com/0zyvNp2GgE

After the game, an openly dejected Kershaw spoke candidly about how shitty it feels to let his teammates down.

A devastated Clayton Kershaw and Walker Buehler speak after the Dodgers lose to the Nationals.

Buehler: “I don’t know if this got out but I lost my aunt two days ago." https://t.co/Ce1kzWMMur pic.twitter.com/2yi7ng4t1A

“I let down the guys in this clubhouse,” he said. “That’s the hardest part every year when you lose the last game of the season. When you’re to blame for it.

Asked about how difficult it’d be to get over the latest defeat, Krenshaw responded: “I’ve had to do it so much,” Kershaw said. “I don’t know. It might linger for a while. I might not get over it. I don’t know.”

Fans won’t soon get over this one either.

Dodger fans are running over a Kershaw jersey. pic.twitter.com/kDwYOg9xzA