Clemson Fans Are Blaming The No Good, Dirty Cheatin’ Refs For Their First Half Struggles Against Syracuse 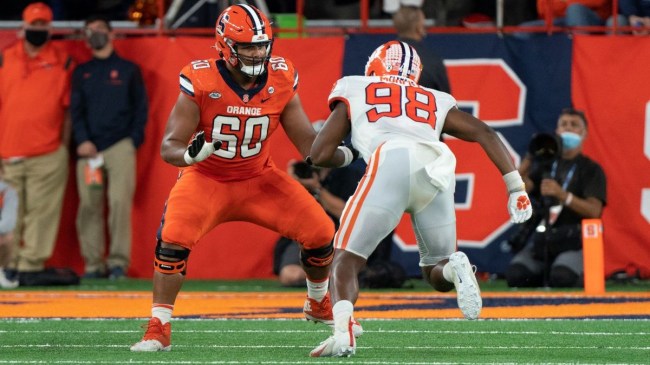 Believe it or not, Dino Babers and the Syracuse Orange are undefeated and ranked No. 14 in the country. But most college football fans see the Orange merely as a paper tiger. Syracuse has had one of the lightest schedules of any remaining undefeated team.

‘Cuse has a chance to prove its mettle against undefeated ACC powerhouse Clemson on Saturday in Death Valley. The Tigers and Dabo Swinney are back on track. They currently boast a 7-0 record and are ranked No. 5 in the nation.

Clemson began the day as a fairly significant, 14-point favorite over the Orange. But things haven’t gone according to plan for the hosts. A Will Shipley 1-yard plunge made it 7-0 Tigers mid-way through the first quarter. But Syracuse answered right back with a 12-yard touchdown pass from Garrett Shrader to superstar running back Sean Tucker.

Clemson looked poised to retake the lead on the next possession, but then disaster struck.

No. 14 Syracuse takes the lead over No. 5 Clemson with this 90-yard fumble recovery 👀

Tigers quarterback D.J. Uiagaleilei fumbled on first-and-goal from the ‘Cuse 3-yard-line and Orange defensive back Ja’had Carter reaped the rewards. Carter plucked up the fumble and took it back 90 yards for a touchdown to put the visitors up 14-7.

Shrader would later add a 7-yard rushing touchdown late in the half and Syracuse currently holds a shock 21-7 lead late in the first half.

Clemson fans, shocked by the idea of their team losing to Syracuse, quickly got to the bottom of the issue.

Because there’s no way that Syracuse could just beat the Tigers straight up (again), Clemson fans figured something shady must be afoot.

Surely, the refs must be doing everything they can to help the Orange win.

Did the #ACC instruct its officials to screw #Clemson? This guy thinks so. pic.twitter.com/E7f61mHFIb

Who knows? Maybe those good-for-nothin’ ACC refs just have something against Clemson players getting Krispy Kreme doughnuts.