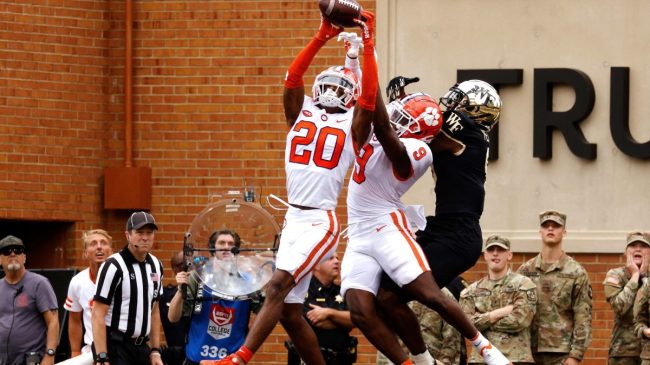 The start of the 2022 college football season has been a strange one for Dabo Swinney and the Clemson Tigers.

Yes, Clemson has each of the four games that it’s played. Yes, the Tigers are ranked in the top five in the country in both the AP and USA Today Coaches Poll. But it hasn’t been the easiest road to get to that point.

Uiagalelei’s struggles persisted through both of the Tigers’ wins over Furman and Louisiana Tech. But in Clemson’s biggest game of the season on Saturday, the junior came up big.

Uiagalelei was stellar in his team’s 51-45 overtime road victory over ACC foe Wake Forest. He went 26-of-41 passing for 371 yards and five touchdowns.

The win could well prove to be a turning point for a team who looked precariously perched atop the ACC. And the Tigers weren’t holding back when it came to celebrations.

In fact, they celebrated in perhaps the sweetest way you can imagine: downing a ton of Krispy Kreme doughnuts.

We Win, We Doughnut! pic.twitter.com/RgPHXOVwnW

Clemson has been celebrating with donuts since at least last year’s victory over South Carolina. But Tigers fans loved the method of celebration.

This is smart, I’d run through a wall for Krispy Kreme https://t.co/RMdmpTbA1y

i relate to them, Krispy Kreme will make you jiggg https://t.co/3Fp3A41i8M

Though others had very reasonable doughnut-related questions.

So if we lost, do they get those doughnuts still… lol https://t.co/0II8zT5XpY

Do they get the doughnuts before the game? If so, what happens in the event of a loss? If not, at what point during an OT game is some staffer sent out to get 200 donuts? https://t.co/mlli3yuB9o

We’ve got some questions of our own as well. Is there coffee available with the donuts? What’s the selection look like in the Clemson locker room? Is this a plain glazed situation?

There are few things quite as motivating as a Krispy Kreme donut. They are a heaven-sent sugary cloud from god. And it’s clear that Dabo Swinney has found a way to get his team firing on all cylinders.

That’ll be important as the Tigers enter the heart of the ACC schedule.