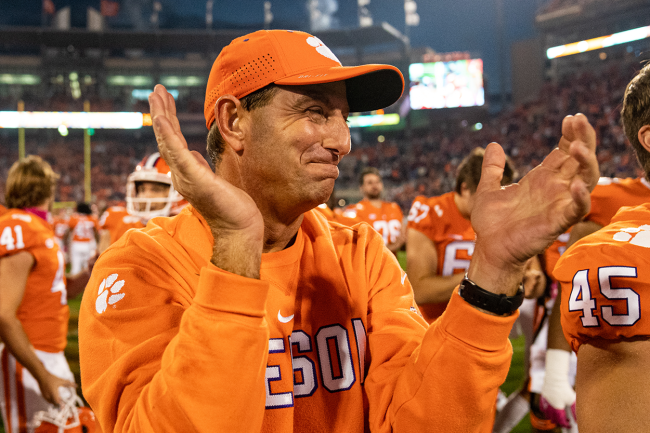 The summer is one of the most important windows in college football recruiting. High schoolers are out of school, which gives them the freedom to take a lot of visits whenever they want before they get back home in time for summer practices ahead of the fall season.

While schools all across the country host visits over the next few weeks, Clemson is doing something that is completely unprecedented.

Typically, programs host a few recruits at a time. They bring in their top ‘blue-chip’ targets together, show them what the class could look like if they all committed, get them in the uniforms, have them talk to the staff… all of that good stuff.

Sometimes the programs will host big “junior days” or large groups of recruits to run them through the gauntlet and get them on campus. They use those visits to spark interest regardless of star rating and then the staff and recruits narrow-ins from there.

When those large group visits happen, however, they rarely exceed a certain number. Especially when it comes to blue-chips.

According to 247 Sports, since the NCAA first allowed spring and summer visits in 2018, not one Power Five program has hosted more than 24 blue-chip recruits in the same weekend. In fact, over the past five years, only Minnesota has hosted more than 30 recruits at one time when they hosted 33 visitors (not all blue-chips) in 2018.

Clemson football is hosting 30 blue-chip prospects this weekend. All at the same time.

Historically speaking, hosting that many recruits is a huge gamble. It could bring a lot of success and a lot of commitments, or the prospects could get lost in the shuffle and move on.

Regardless of whether it works or not, the Tigers and head coach Dabo Swinney are doing something that is completely unprecedented. And it comes after a very tumultuous 2021 season and offseason that didn’t see the same amount of success as recent years and saw a lot of staff turnover and decommitments.

Swinney in particular has been very specific with his recruiting. He typically brings small groups of official visitors together so that he can give them each the individual time they deserve. Rarely does Clemson host big official visit weekends with more than a handful of blue-chips.

As the large amount of recruits travel to South Carolina this weekend, it will be interesting to see whether the new strategy pays off.