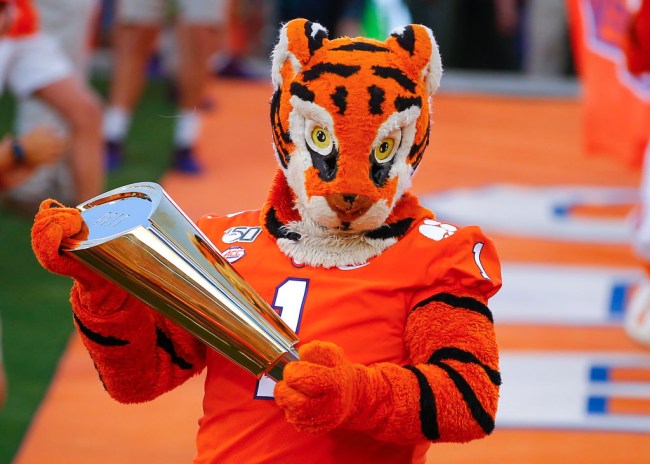 The college football world is filled with strange traditions. You’ve got Auburn fans who roll Toomer’s Corner after a win, Florida State and its sod cemetery that serves as a reminder of road wins and of course Texas A&M fans kissing each other after every touchdown among many other cult-like traditions the Aggies celebrate on gamedays.

While Texas A&M holds the title as the university with the most batshit crazy traditions, Clemson isn’t too far behind.

On top of the fact that Clemson enters the stadium by rubbing a rock before running down a dangerously steep hill, the football program also has its own ‘graveyard‘.

The Tigers have a plot of land outside of their practice facility that features real tombstones in remembrance of road wins against Top 25 teams and apparently, they’ve recently added two new stones to the graveyard.

Clemson Football’s latest editions to its Tombstone Tradition, wins over ranked opponents away from Death Valley. It’s a tradition that started in 1989. @bartboat took these for us a few weeks ago prior to #Clemson’s Pro Day On March 12. pic.twitter.com/Z7WbNsIzd0

Clemson has added a total of 23 tombstones to its graveyard during Dabo Swinney’s time at the helm.

Weird traditions like this are what make college football college football, but this one just seems like a bit of overkill. Why does it have to be a tombstone? Why can’t you just list the wins on a digital board in the practice facility or something?

It’s worked out pretty well for Clemson over the past few seasons so I wouldn’t expect them to change anything up anytime soon.

Related: Dabo Swinney Doesn’t Think The College Football Season Will Be Delayed Because ‘This Is America, Man’