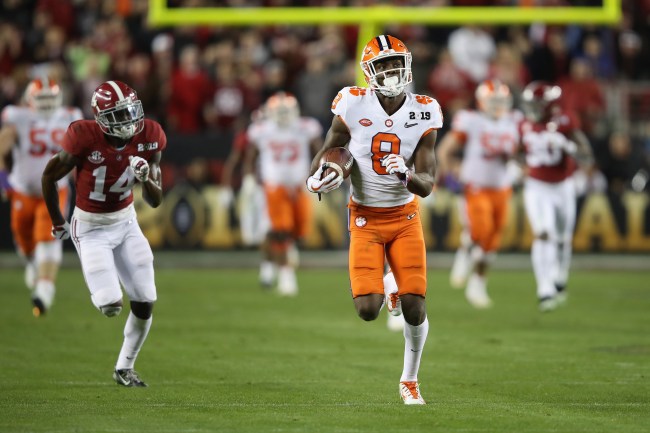 Clemson football may have just received its national championships rings — which are both stylish and gaudy — and one of the reasons why the team finished the year on top of college football is because of wide receiver Justyn Ross. The last we saw Ross, all he was doing was pulling in six receptions for 153 yards and one touchdown in the National Championship Game against the Alabama Crimson Tide, which pushed the then freshman’s numbers to over 1,000 yards in his first year in college.

But Justyn Ross’ breakout performance on the biggest stage wasn’t something that even he thought was going to happen earlier in the season, because, speaking with Bleacher Report, the Clemson football star recently said he was frustrated with his role after the team’s first two games of the year, which led him to thinking about transferring. Instead, Ross’ mom told him to stick with it, and, eventually, he got to show his skills in the biggest game of his life.

That said, Justyn Ross did admit that, if he hadn’t had his mother’s encouragement and support, and there was an option to play pro football to get paid — say like, the XFL — he may have explored the option. Here’s what Ross had to say.

“If [the XFL] is offering that kind of money, that’s hard for an 18- or 19-year-old to turn down,” Ross said. “If you really need that money, oh yeah, go do that. Something could happen. You can get hurt. Anything can happen. You have to take care of yourself because it can be over just like that.”

The XFL, which is set to launch in February of 2020, has already said that it will accept players who aren’t three years removed from high school — which is the current rule in the NFL. That means some NCAA players could lean on the league next year as a way to get paid instead of transferring and playing for another school.

According to the Bleacher Report piece, an anonymous Power Five coach agrees, saying that having a handful of well-known college players leave for the XFL could start a chain reaction in it becoming more of a habit.

“It all depends on the viability of the XFL,” he said. “All it takes is a couple of big-name guys to take that money, and others will follow. Once that happens, how does the NCAA respond? Do we continue to allow talented young players to leave, or do we up the ante with stipends or allow them to market themselves or both?”

Of course, this option is even being talked about because college athletes aren’t being paid a dime for what they make for their school. Since players like Justyn Ross, who was a freshman last year and still has two years left of eligibility before he can even declare for the NFL Draft, think that money’s more important than an education, the XFL might be the best choice.

Thankfully for Clemson football, though, Ross doesn’t sound like he’s going anywhere thanks to his support system. But that doesn’t mean other NCAA players with different backgrounds might not consider the XFL once the league launches, so Justyn Ross brings up an interesting option to think about down the road.