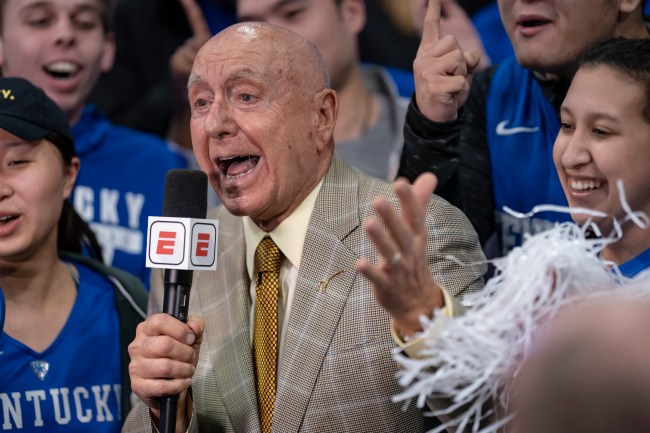 Dick Vitale is one of the most iconic voices in all of sports, not just college basketball, so when the guy talks, we all generally listen — but mainly because he’s usually screaming at the top of his lungs about something, baby!

With over four decades in broadcasting, Vitale has, seemingly, seen it all, so he’s a great ambassador for the sport of college hoops.

As much as Vitale’s seen during his time as a play-by-play announcer, though, he’s admitted that he’s never seen a player “as unique in his skills” as Duke’s superstar freshman Zion Williamson. That’s the general consensus from most people, with Zion being touted as a more hyped college prospect than Michael Jordan by one rival coach, with some experts thinking the kid will earn over $1 billion when his playing days are eventually over.

Thing is, because of the NCAA’s dumb rules about college athletes not being paid, Zion Williamson has to wait until his Duke days are over to start making any money for his basketball skills.

Like most people, this is where Dick Vitale disagrees with the NCAA, and offered up an interesting suggestion for unique college athletes like Williamson to actually get paid.

“Hey, if Taylor Swift was a student on a college campus, she could go out and do a concert and make zillions, and it’s okay,” Vitale told For The Win last week while promoting his partnership with Bounty.

His plan to eliminate some of the problems in collegiate athletics — like “that nonsense we’re reading about that’s going on with admissions (that’s) a cesspool.” — is simple.

But Vitale’s idea won’t compensate all NCAA athletes. Only the supremely talented.

“The NCAA doesn’t have to pay every player,” he explained, “because they don’t have enough money or not enough for every student athlete out there in all sports.”

“If an agent wants to give (an athlete) money while he’s playing on an intercollegiate level, so what? Make it legal,” he added. “If he wants to make an appearance or do an endorsement, let him do it. Why not? Let’s eliminate this middleman stuff and all this nonsense that goes on.”

It’s hard to argue with Dick Vitale’s idea here. After all, within the past 12 hours, there have been millions of people filling out NCAA Tournament brackets in the hopes of winning money from an office pool or another form of a bracket challenge.

With sponsors paying tons of cash to take part in promoting those online contests and the NCAA raking in cash from the games, why shouldn’t college athletes — especially one as unique as Zion Williamson — have an option to get paid?

Something probably needs to be done soon, so maybe Dickie V just landed on the easiest solution.