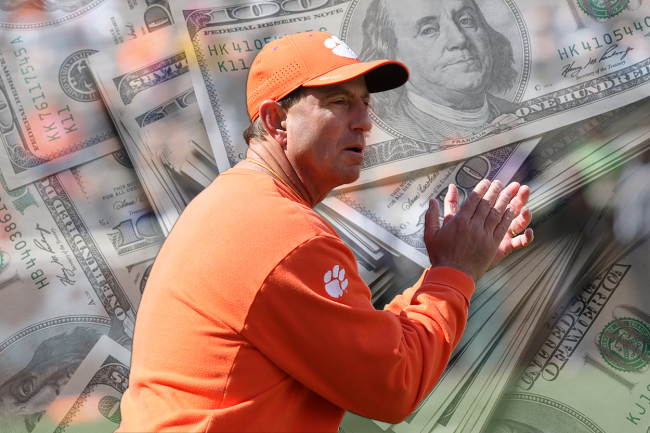 Division-I FBS football programs cannot stay competitive in today’s modern landscape without money. It is difficult to do so, at the very least.

That statement is true in terms of budget and overhead capital. It is also true in terms of Name, Image and Likeness. Money has always played a role in college football. But the NCAA’s decision to legalize NIL just over a year ago change the game forever.

Collectives across the country are using NIL opportunities as a recruiting tool. The programs who do not have as coordinated of an effort within the space are falling behind. The schools themselves cannot use NIL as a direct endorsement, but it is impossible to keep up with collectives that have big bankrolls— at least, on paper.

Of the schools that have not been as prominent or “loud” in their NIL efforts, Clemson has not been particularly active. But according to former USC running back LenDale White, that is set to change.

White appeared on The Herd with Colin Cowherd this week and revealed some inside information about what the Tigers are trying to do with their NIL opportunities. He didn’t go into too much detail, but said that Dabo Swinney was directly involved.

As for how White feels about Name, Image and Likeness as a whole, he is excited.

“But it’s just an exciting time. We’ve been asking for this for a very long time and now that it’s here, I think that they should have had different regulations and stuff that was set in stone before we just opened it up like this.”

“But now that it’s here, I love it. I think that these kids should get paid. I mean, these kids are going to probably end up being some of the next superstars on the NFL level. So it’s only right and you know the NCAA has been profiting on us for a very long time, so I’m happy about the NIL stuff and I just hope that they find a way to, like you said, get it not even all the way, but a little bit fair so kids do have some extra money and stuff for college and not just the top guys with everybody in between.”

It will be curious to see what Clemson has up its sleeve with NIL. It is also interesting to think about how much money White could have made with NIL at USC.