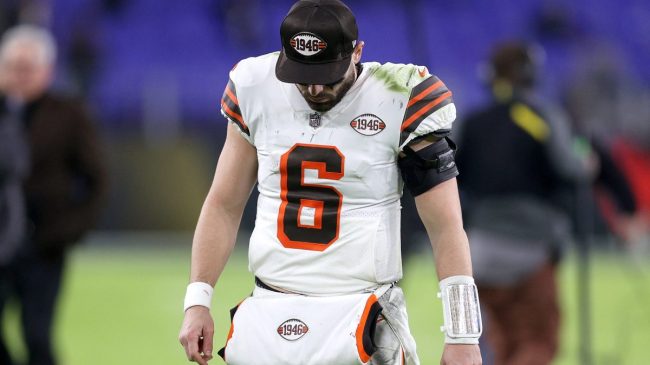 The Cleveland Browns are doing a little bonding in the Bahamas this week with new quarterback Deshaun Watson.

The new signee flew the entire offense down to the Caribbean as a way to build chemistry before they participate in offseason workouts.

Watson got the team a hotel stay at Atlantis and secured a practice field to perform some drills. In attendance were Browns’ stars like Amari Cooper and Nick Chubb.

#Browns in the Bahamas, via Nick Chubb’s IG pic.twitter.com/kaYfYgcize

One player missing, though, was former starting quarterback Baker Mayfield.

Mayfield has seen tensions with the team grow over the offseason. There was a rift between him and ownership with the team pursuing Watson while Mayfield was still on the roster.

He went as far as to pen a cryptic letter to the fanbase essentially signaling that his playing days in Cleveland were over.

Unfortunately, the Browns and Mayfield have been unable to part ways.

A number of teams have passed on the signal caller despite his status as a former No. 1 overall pick. Now, his options are dwindling, making his future cloudy.

While he’s still on the roster, it appears that he’s not a part of the team based on the latest Bahamas trip. And fans were quick to take note of his absence.

Fans react to Baker Mayfield’s absence in the Bahamas

Baker trying to win his teammates back from Watson pic.twitter.com/NeTAWOmsh8

No invite for Baker??

Mayfield doesn’t look like he wants to be a part of the team moving forward. It’s almost a certainty at this point that the two sides will part ways before start of the season.

Who wants to take a chance on the passer? That will be the ultimate question over the next few months.