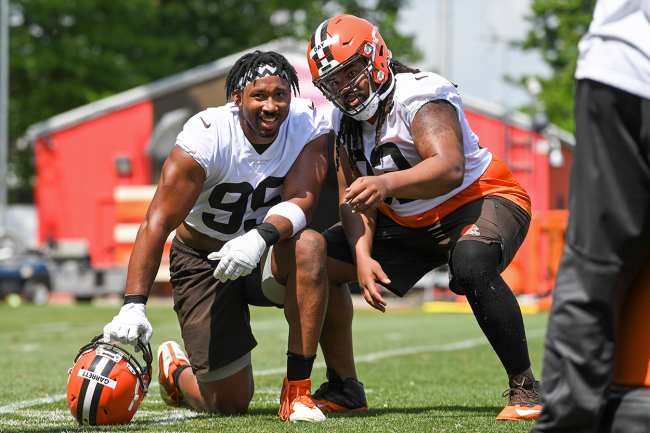 After Deshaun Watson took the Cleveland Browns offense on a retreat to The Bahamas, Myles Garrett decided that he would do the same. Well, not quite, but it was the same idea.

Rather than taking his side of the ball overseas, Garrett flew his teammates down to Miami and took a shot at Pittsburgh in the process. The trip, completely bankrolled by the $100-million man, included the entire defensive line room, the linebackers and some of the defensive backs.

They flew private down to South Beach and got some on-field work in while also enjoying their time together. It was a way for Garrett to get his news teammates acclimated with one another, and build greater relationships and friendships with all of the guys he’ll be playing alongside.

As the team headed south, defensive end Isaac Rochell, who has nearly one million followers on TikTok, shared a glimpse at the trip. Garrett totally hooked it up.

In the video, the players got a black car from the team facility to the airport. They flew private in a beautiful jet with all of the bells and whistles.

Upon arrival in Miami, the players went to dinner at The Key Club in Coconut Grove. Although the menu isn’t particularly extravagant, it is a luxury restaurant that has only been open for a few months.

After wrapping the travel day, Garrett, Rochell and the Browns defense got some work in at a luxury gym outside of Miami.

Once the team woke up and got ready, they got bussed over to House of Athlete in Weston, Florida— which Rochell called “an Apple Store” of gyms. It looks awesome and it definitely is not cheap.

From there, the team went back to the luxury hotel for a nap before grabbing dinner. Once again, it didn’t look particularly expensive but they chowed down and Garrett likely picked up the tab.

It might not be The Bahamas, but Garrett is totally styling his teammates. They’re having a lot of fun and getting better in the process.