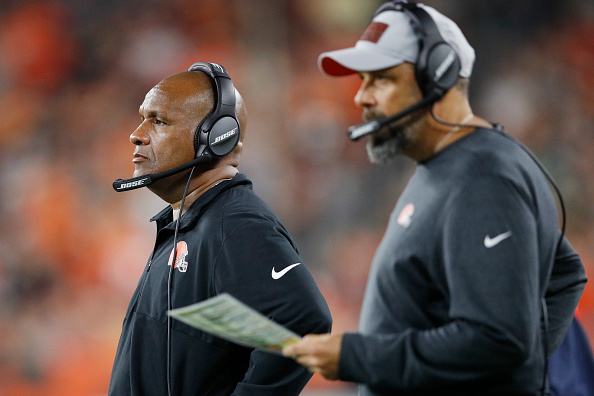 Before yesterday’s Steelers-Browns game, NFL.com’s Ian Rapoport reported that the team was decidingwhether to fire head coach Hue Jackson or offensive coordinator Todd Haley after the relationship between the two deteriorated.

If it’s not resolved, change will come with hopes of fixing the dysfunction that has mostly manifested itself on offense, sources say…For several weeks, it’s been clear that coach Hue Jackson and offensive coordinator Todd Haley have not been on the same page. Several people in the organization have battled to help them work together, but it has not improved…If this continues, and the disconnect is not reconciled, a move will likely be made,.

The Browns got crushed by the Steelers and the Browns eventually decided to part ways with Jackson this afternoon.

Hue Jackson had this and next year remaining on his contract. So the Browns will be contractually obligated to him through 2019 season. But Cleveland is now back in the HC market.

Apparently there was some disagreement within management with who the team wanted to fire before today’s decision.

The Internet had some fun reactions to the Browns firing Jackson.

Hue Jackson ends his tenure as Browns coach with a .088 winning percentage.

How the Hue Jackson firing went down this morning. pic.twitter.com/8x0YdxB1j3

Hue Jackson got fired in the middle of his most successful season in Cleveland.