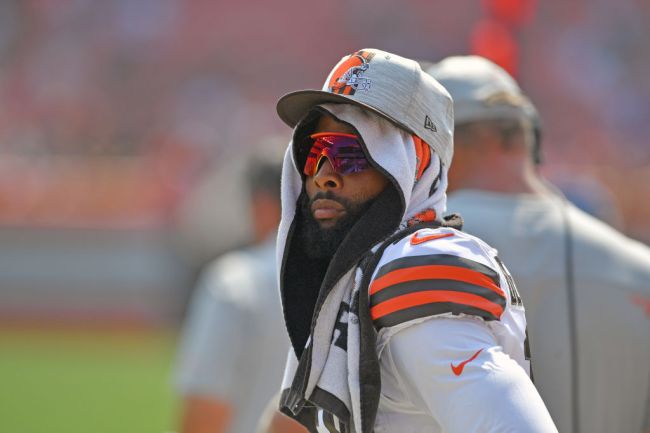 Odell Beckham Jr. is not happy with his current situation and his time in Cleveland appears to have reached an impasse. Things have gotten so bad that he reportedly may as well not be with the team.

On Wednesday, Beckham was told by the team not to attend practice as his agents and GM Andrew Berry discuss options. This comes after the Browns were open to trade calls for Beckham before Tuesday’s trade deadline.

No deals were reached.

In addition to Beckham’s absence from practice, head coach Kevin Stefanski said on Wednesday afternoon that he had not spoke to the wide receiver in 24 hours. In response to a question that asked if Cleveland is preparing to be without Beckham against Cincinnati on Sunday, Stefanski said: “I would just tell you today he is excused and we will see where this goes.”

Now, a new report is contradicting Stefanski’s public statement. Per Michael Silver, the head coach told his players that they may as well imagine Beckham is not on the team.

Earlier today, Browns coach Kevin Stefanski told his players that Odell Beckham Jr. is essentially not on the team right now and that the WR has been told to stay at home.

Silver did say that the drama between the Browns and Beckham is playing out behind the scenes. He reported that Beckham has handled the situation as best he can.

For what it's worth, whatever drama that's playing out between Odell Beckham Jr. & the Browns seems to be behind the scenes. Coaches & players tell me Beckham 'has actually been really good' and that he 'has handled everything well, puts on a brave face and keeps his mouth shut'

It will be interesting to see what comes of this feud.

As of right now, Beckham is under contract for two more seasons. However, he does not have any guaranteed money left on his deal.