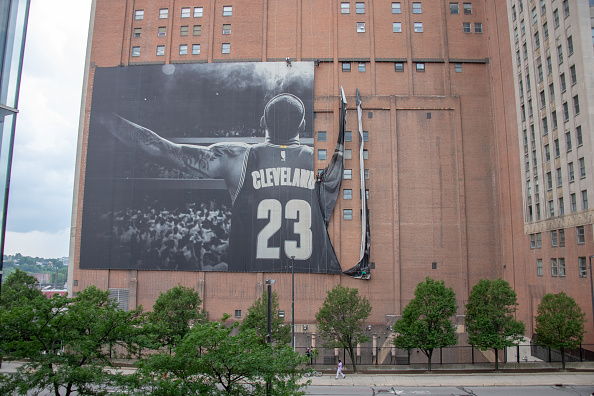 With LeBron James gone the City of Cleveland has to now figure out what to do with the huge space left vacant when they took down LeBron’s iconic Nike banner earlier this summer.

Today, The Cleveland Cavaliers unveiled an image of the new proposed banner that is being sent to the Cleveland City Planning Commission for approval

Here's the dumb proposed replacement for the LeBron banner. pic.twitter.com/fLaJpJGNm6

The central image, of one of the Art Deco Guardians of Traffic that stand sentinel over the Lorain-Carnegie (Hope Memorial) Bridge, will be a collage of crowdsourced photos of Clevelanders and Cavs fans. The tagline, in capital letters on a black background, is “All for the land.”

The wall, facing Quicken Loans Arena over Ontario Street and Huron Road, is a blank canvas at the eastern end of Sherwin-Williams Co.’s headquarters complex. During James’ two runs with the Cavs, Nike Inc. sponsored black-and-white images of the athlete, his arms outstretched, in the 10-story space.

For anyone not intimately familiar with downtown Cleveland's geography, the actual Guardian statues are like two blocks away from where this banner, picturing a Guardian statue, will be installed.

Reaction to the new Cleveland banner that replaced the iconic LeBron pic…. pic.twitter.com/PfXVnxt2lc

I'll just add that this is awful, just in case someone is gauging responses before going forward with this abomination.

What drunk intern was in charge of that banner? Just awful….

Might have to start from scratch because that banner ain’t it.