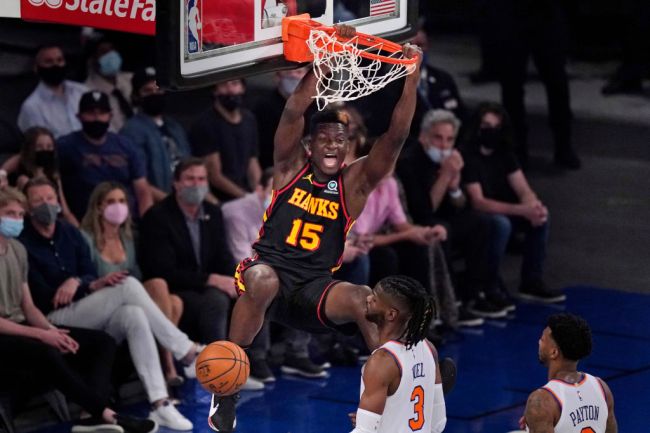 A week ago we saw Knicks fans celebrating their Game 2 win over the Hawks as if they had just won the NBA Finals. All looked well in Manhattan, but now, not so much. The Knicks are down 3-1 in the series, and after losing Games 3 & 4 by a combined 28 points, you have to like Atlanta’s chances of closing out the series in Game 5 at Madison Square Garden on Wednesday night.

The emotions and physicality have increased each and every game throughout the series with the Knicks looking to be the tough guys, but the Hawks have been able to match their intensity, and then some.

Hawks’ big man Clint Capela has noticed New York’s efforts of trying to be physical with Atlanta, but it’s simply not working. Capela spoke to the media on Tuesday and went scorched Earth on the Knicks essentially guaranteeing a Game 5 win.

“If they were really physical, we’d be having more problems than we have. I feel like [the Knicks] are trying to, but it’s not working,” Capela began.

“They’re trying to play tough, push our guys around, and talk s-it, but we can do that too. We can push guys around as well, we can talk s-it, so what are you going to do about it, and get away with it…Now we’re coming to your home to win this game again and send you on vacation.”

“They’re trying to play tough, push our guys around & talk s-t but we can do that too”

Capela has been a big piece of Atlanta’s success in the series averaging nine points and 13 rebounds while playing just over 33 minutes per contest.

The Swiss international will be hoping that his comments aren’t bulletin board material for the Knicks and what will be an absurdly loud crowd at MSG on Wednesday.