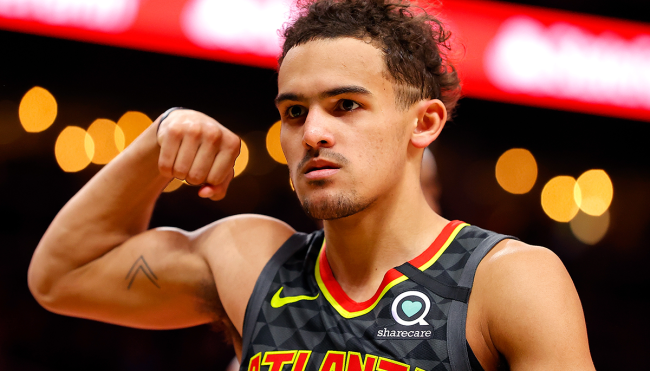 On Sunday, more than 15,000 fans packed inside Madison Square Garden for the first time in over a year to watch the New York Knicks compete in a playoff game for the first time in eight, and anyone who was wondering if it would take the crowd a bit to shake the cobwebs off didn’t have to wait long to get their answer.

As you likely know, the laws of nature dictate Knicks fans always need to be angry about something like the rest of us need air to breathe. For the past couple of decades, the state of their storied franchise made that pretty easy. However, now that they have a team to be irrationally optimistic about, they needed something else to fill that void.

Thankfully, they quickly found a suitable replacement in the form of Trae Young.

It took the Hawks guard less than two minutes to draw MSG’s ire, but by the time the final horn sounded, he’d managed to establish himself as a worthy successor to Reggie Miller. After capping off his 32-point performance with a go-ahead floater that sealed the deal with less than a second left, he turned his attention to the suddenly deflated crowd and noted the drop in the arena’s decibel level.

After the game, Derrick Rose reacted to the gesture with a borderline (but nonetheless correct) Old Man Yells At Cloud response in which he gave Young’s antagonizing antics his full seal of approval.

On Wednesday, Young picked up where he left off by helping Atlanta get off to a strong start prior to a disastrous second-half collapse that allowed New York to even things up at one game apiece.

He might’ve taken the L, but the only thing on Young’s mind when he was walking off the court was the “A” he was flashing with a smirk in anticipation of the series heading back to Georgia.

After the game, he received one of the most flattering compliments possible when consummate shit-talker Draymond Green said Young is one of the best chirpers the NBA currently has to offer.

Based on what I’ve seen, Young deserves even more credit than he’s gotten so far, as he’s currently conducting a masterclass in trash-talking in front of our eyes everyone else could learn a thing or two from.

The NBA has been home to some truly legendary peddlers of smack who deployed a variety of strategies to get into the heads of their opponents.

There are some truly incredible stories about the likes of Michael Jordan and Larry Bird demoralizing opponents by letting their skills do most of the talking for them, which is a fairly cheeky and fun approach. However, you also had dudes who preferred more cruel and tragic shenanigans. That includes Kevin Garnett, who had absolutely no chill and no topic he deemed off-limits, as well as Gary Payton, who once threatened to pull out a gun and kill the family of his own teammate during a heated altercation.

Young, on the other hand, is a fantastic troll who knows exactly where the line is and continues to toe it even if others cross it—as evidenced by his casual response to a video that appeared to show a Knicks fan spitting on him during Game Two.

Young’s approach to poking the bear is everything trash-talk should be in a sport that’s more conducive to it than any other. He has no problem pushing buttons and has no problems having his pushed, but unlike a lot of players, he also has a switch he can flick that lets him instantly turn down the intensity level and waltz off the court with a smile after a loss.

As things currently stand, it seems like he has an almost symbiotic relationship with Knicks fans.  With that said, I have a feeling they may be inadvertently be fueling a player who thrives on being hated as much as they thrive on hating him—and one who’s shown he’s able to play them like a fiddle and push them to a breaking point he hasn’t even come close to hitting so far.

Will that change as the series continues? Only time will tell, but if Trae Young keeps this up, Spike Lee is going to need to have a cardiologist on standby.