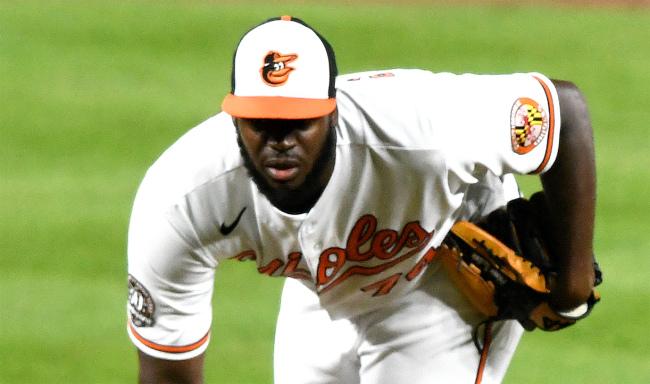 In recent years, the Baltimore Orioles’ closer having a cool entrance would have been like putting lipstick on a pig. With a 178-368 record (.326 win pct.) over the past four seasons there were hardly any wins worth saving.

Now, however, not only are the Orioles not in last place in the American League East, they are amazingly six games above .500. Baltimore’s 58 wins so far this year are more wins than the Orioles have had in any full season since 2017.

They’ve won so much that they even turned a pitcher, Jorge Lopez, with a career 5.49 ERA into a hot commodity at the trade deadline because he had 19 saves.

So, with Lopez having been traded to the Twins, the Orioles had to find a new closer so they have turned to 27 year-old rookie Felix Bautista.

Therefore, Bautista, just like any closer worth his salt, had to have a new entrance for when he enters the game and the Orioles completely nailed it.

It begins with Omar’s whistle from The Wire (set in Baltimore, natch), some flashing flood lights, and is absolutely electric.

That… is like something straight out of the WWE. And fans absolutely loved it.

Felix Bautista walking out to Omar’s Whistle is the most exhilarating thing I’ve ever witness, I will tell my kids about this moment pic.twitter.com/WaTwjKnQmF

So not only does Felix Bautista enter to the Omar whistle from the Wire but now THIS happens, too.

Between that and Edwin Diaz’s incredible closer entrance, Major League Baseball is so close to actually being fun again.

Bautista is a pretty good choice to replace Lopez, by the way, as he currently sports a 1.69 ERA with 64 strikeouts in 48 innings pitched and has now closed out six games for the O’s this year.