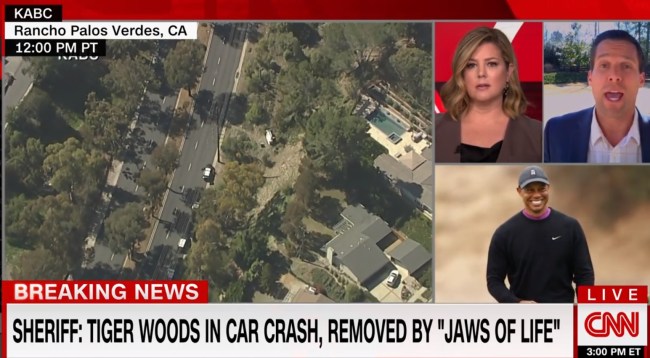 Tiger Woods was rushed to the hospital on Tuesday afternoon after being involved in a serious single-car accident.

Despite the fact that there was not much information on the situation right away, one CNN anchor decided to speculate about what may have led to the accident.

During a live report, CNN sports reporter Andy Scholes said he ‘wasn’t entirely surprised” by Tiger’s accident ‘because painkillers have become a part of his life.”

CNN Sports anchor says he wasn't surprised by Tiger's car crash because 'painkillers have become a part of his life' https://t.co/2RtxpUBTBm pic.twitter.com/An4QpDMDEM

Stunned, I guess, but not entirely surprised by what we’re seeing here. Tiger, back in 2017, was found by police pulled over to the side of the road, asleep in his car. He had said he had taken a lot of painkillers at that time because we all know Tiger has undergone a lot of surgeries over the years and painkillers have become a part of his life.”

Viewers blasted Scholes for immediately bringing up Woods’ past with substance addiction considering the crash is still under investigation and there were no reports at the time to suggest Woods was under the influence of painkillers.

This is just irresponsible journalism. We don't know anything yet. CNN needs to get some real sports reporters. https://t.co/0NVx9FKK7v

@AndyScholesCNN I think it was completely insensitive that at the breaking news about Tigers accident the first thing you brought up were his past injuries,pain killers and alcohol. It was disgusting.

@AndyScholesCNN Sad that you would conjecture what caused Tiger Woods car accident. For you to already assume it was pain killers, is just poor journalism.

@AndyScholesCNN Didn't seem fair, in these early hours, for you to bring up "pain pills" as the very first thing you "thought of" when you heard about Tiger. @brikeilarcnn

What I tell my @RiderUniversity journalism students seems appropriate as the Tiger Woods story develops: Report what you know, not what you think. https://t.co/giyRjvaJON

Who the hell is Andy Scholes? And why did @CNN let him say all of that nonsense. @brikeilarcnn should have cut him off. What a jerk! Totally unnecessary and unacceptable guest.

Scholes went on to apologize after receiving backlash for his comments.

Sorry didn’t mean for it to come out that way

Completely agree. Again sorry for the way that came out