Mike Krzyzewski Will Coach His Grandson, Who Averaged 7 Points Per Game In High School, As A Duke Walk-On This Season 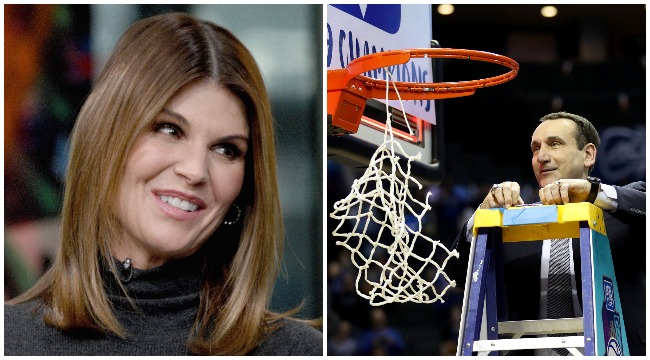 Do you want to play basketball at the most storied hoops school in America? Are you a decent-but-not great basketball player? Do you still have years of eligibility?

Well, internet stranger, you may be in luck!

Oh, just one more thing. You have to be a direct bloodline to the coach. Don’t forget to read the fine print.

Michael Savarino, grandson of Coach Mike Krzyzewski, will be walking on to the Duke basketball roster to play under his grandfather in the fall.

Savarino is a 6’0” senior guard who averaged a modest 7.3 points, 2.9 assists, and 1.2 steals per game at Durham Academy in North Carolina and is the 1,137-ranked prospect in the nation, according to Max Preps. Savarino reportedly received offers from Army (his grandfather’s alma mater), Columbia and “several” Division II schools, which does not make sense to me given the numbers.

“He wanted to come to Duke and I was happy about that because he earned it, and if he’s coming to Duke, then he should be a part of our basketball program because he’s good enough to be a walk-on.”

Is he, though? Shouldn’t it be extremely difficult to claim one of the 15 roster spots on a team that is fourth all-time in wins of any NCAA men’s basketball program?

For perspective, Michael Buckmire, who walked on to the Duke roster in 2017-2018, averaged 22.1 points, 6.1 rebounds and 4.2 assists per game as a senior and was a four-year Varsity starter at Germantown Friends School.

It’s amazing how “society” is quick to nail Lori Loughlin to the cross for paying good American dollars to get her daughter into college through the back door, but no one says boo when Coach K gifts his grandson a coveted Duke roster spot when he’d otherwise be playing for the team that always loses to the Harlem Globetrotters. THE HYPOCRISY!