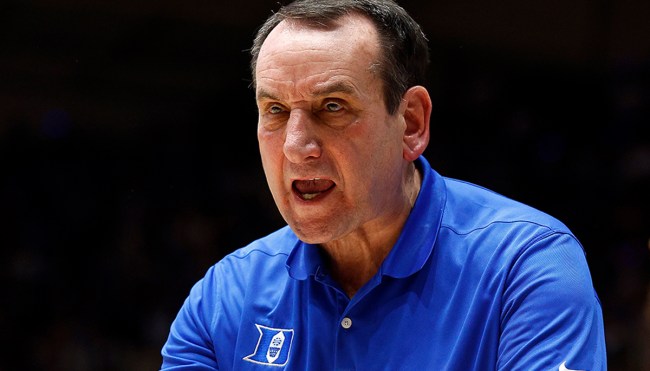 In one of the most anticipated Final Four games in college basketball history, the North Carolina Tar Heels upset archrival Duke to advance to the national championship.

And the game certainly didn’t disappoint.

The contest was back and forth throughout, with the two teams trading leads up until the final minute of action. The Tar Heels made clutch shots down the stretch to successfully pull the upset.

The loss effectively sent legendary head coach Mike Krzyzewski home with a loss in his final contest. Coach K will be retiring following the end of his 47th season. After more than four decades roaming the sidelines in Durham, his career has come to an end.

This year has been somewhat of a farewell tour for Coach K. Unfortunately, it won’t go out with a storybook ending, but media outlets did their best to pump up Krzyzewski’s final stint. Sometimes, to the point where the retirement seemed to overshadow the team.

Coach K made his original announcement before the start of the 2021-22 season, so viewers were berated with retirement headlines game after game.

Now, the Duke head coach is catching some flak for a postgame comment made after that loss to North Carolina.

When the final buzzer sounded, Duke was on the losing end of an 81-77 Final Four decision. With the NCAA Tournament run officially over, Coach K took to the podium for his final postgame presser.

With the media attention his retirement tour has received, Krzyzewski is taking some heat for one comment following the loss.

Coach K: “it’s not about me.” pic.twitter.com/Vb1XLDUtUe

This season was about Coach K.

And whether he had a part in the media attention, the retirement attention grew nauseating at times. Look no further than to Duke’s last game with UNC where the school felt disrespected about the Tar Heels lack of worship given to the Hall of Fame coach.

Check out the social media reaction to his saying that this season wasn’t all about him.

If that were true, we would have just learned about his retirement today.

Then why this ridiculous retirement tour? So glad Duke lost.

Kind of ironic , Roy steps aside over the summer, k steals the spotlight and announces his retirement tour, then loses to unc twice in a month to end his farewell tour.

The season long farewell tour says the opposite

Created his own farewell tour but it's not about him… right.

LOL. It was all about him this season. Good riddance.

Wow it’s not like a whole season was about you and being congratulated. As well as being upset when people didn’t give you special gifts. Enjoy the retirement home😂😂😂

"It's not about me" pic.twitter.com/GzZ9NNdhai

Yet he gave himself a retirement tour

Many UNC fans note that Roy Williams, who retired last season, did so in the summer following his final campaign. He didn’t create a year-long retirement narrative that grew tiresome by season’s end.

Those same fans are happy knowing that they sent Krzyzewski out with his final loss (unless he decides to go Tom Brady on us). The farewell tour is officially over. Most of college basketball is happy about that.