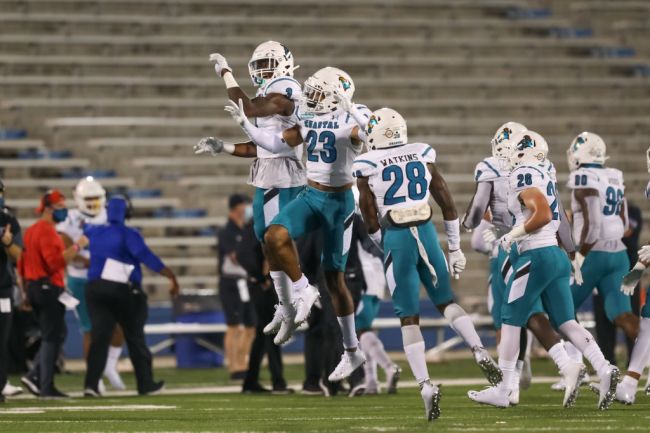 Coastal Carolina football is coming off the best season in program history. The Chanticleers came just one bowl win away from completing an undefeated season but fell to Liberty in overtime of the Cure Bowl.

Not only did Coastal produce on the field, but they were loud and proud while doing so. They gave No. 3 overall draft pick Zach Wilson all he could handle, called opponents “bums” after winning on the road, rocked bleach blonde mullets and hip-tossed defenders. The Swagger was abundant.

As much of the team returns for 2021, the expectations are high in Conway, South Carolina. While practices are intense, the post-practice antics are even more so.

A video posted to Coastal’s TikTok showed a group of players stay behind to get some route work in. To do so, they engaged one another in a game of ‘Walkball.’

The game is fairly simple. It is a modified version of 1-on-1 wide receiver/cornerback drills but players cannot run.

Instead, they must walk and “twitch” their way to the touchdown. The nastier the cuts, jukes and routes, the more likely they are to score.

The receivers were able to catch all of the balls that were thrown to them. The DBs got toasted but it isn’t a true representation of their on-field skills and it made for some amazing content.

Coastal Carolina begins its 2021 campaign against The Citadel on Sept. 2 before hosting Kansas in Week 2. The biggest test of the year, on paper, will come at Appalachian State on October 30th, but a second consecutive undefeated regular season is not out of the question.