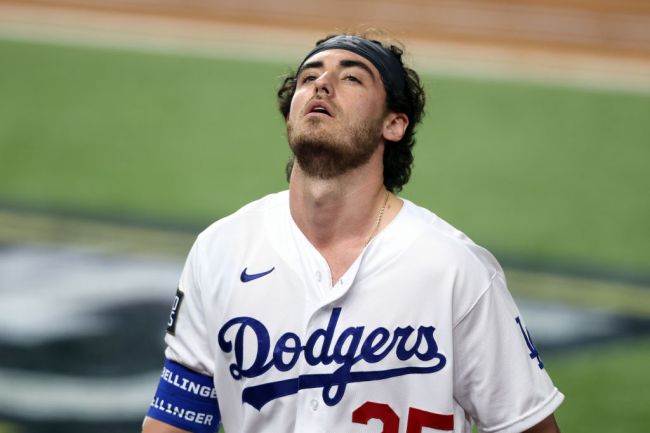 Baseball is back and it didn’t take long for one of the weirder plays of the season to occur. Opening Day 2021 saw the Dodgers travel to Colorado for their season opener against the Rockies on Thursday. The reigning World Series champions have high expectations to get back to where they finished in October and repeat, but it looks like they will have to shake off some of the early-season rust before that quest can begin.

After walking in his first plate appearance of the year, Cody Bellinger stepped up to the plate with Justin Turner on first. German Marquez hung him one on the outer edge of the plate and the first ‘Belli bomb’ went flying out to left center field. Colorado’s left fielder Ramiel Tapia made an effort to rob the home run and came pretty close, but the ball popped out of his glove at the last moment, giving Los Angeles what should have been a 2-0 lead. However, Turner was on his way to third and saw Tapia make what he thought was a great catch, so he turned around and ran back to first. Bellinger, who saw that the ball was gone, kept running toward second and the two crossed paths.

Well, in baseball, that is illegal. A lead runner is not allowed to cross paths with a trailing runner in any circumstance. Because Turner ran back toward first past Bellinger, who was running toward second, Bellinger was ruled out. Everybody in the stadium was confused, but the umpires did get the call correct.

Justin Turner thought that the outfielder caught it and ran back to first base.

Because Turner and Bellinger crossed on the base path, Bellinger was called out. Turner’s run was allowed to score.

The bizarre play was the perfect way to begin the 162-game season as a reminder that baseball is still as beautifully weird as it always was. What should have been a two-run home run for Bellinger was scored as an RBI single, and the Dodgers took only a 1-0 lead instead of going ahead 2-0.