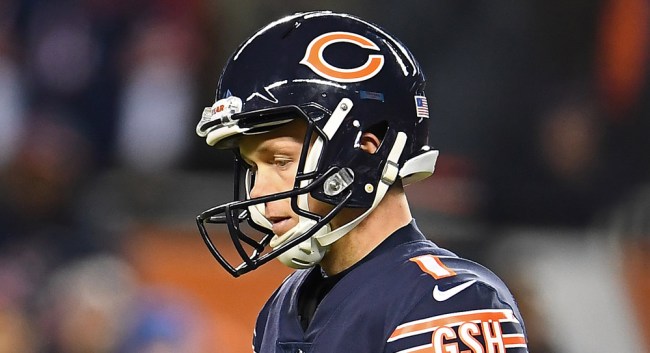 In “you can’t make this sh*t up” news, Bears kicker Cody Parkey, who hit the goal post what I am calling a “record” six times this season, including his game-winning attempt on Sunday, used to literally practice hitting poles with his kicks.

His hard work must have “paid off” because during one game this year, Parkey set another unofficial “record” hitting the uprights FOUR TIMES in one game before his most memorable doink, err double-doink, versus the Eagles.

Robbie Gould (who was cut by the Bears in 2016) just made his 8th straight field goal attempted from 50+ yards….meanwhile Cody Parkey who is the Bears current kicker, managed to hit the goal post four times yesterday, twice on PATs 😂

Back then, writing on 12up.com back on Parkey’s epic upright-doinking day, Joseph Jungermann said, “What’s even worse is that all four of the kicks hit the upright, which is something that Parkey probably couldn’t even do if he tried.”

NBC Compiles All of the Upright/Crossbar Doinks of Parkey's Season, Concluding with the Missed Game Winning Attempt pic.twitter.com/SMkCz1UQUO

Talk about your bad karma. Cody Parkey might just be the king of it now.

He also tweeted this awhile back.

Throw in the fact that Robbie Gould, the Bears all time leader in scoring (and who has hit 82 of 85 field goal attempts since leaving the team), was at the game versus the Eagles and Parkey really stood no chance on Sunday.

Teaching these boys the history of da @bears #WPMOYCHALLENGEGOULD pic.twitter.com/r7OdoczB7S

Somehow though I think he will recover. After all, he’s got nine million guaranteed reasons to keep smiling.

Happy Anniversary @colleenparkey ! From chasing Flamingos in Aruba to feeding pigeons in Italy, life with you is nothing short of amazing. Love to Love ya!