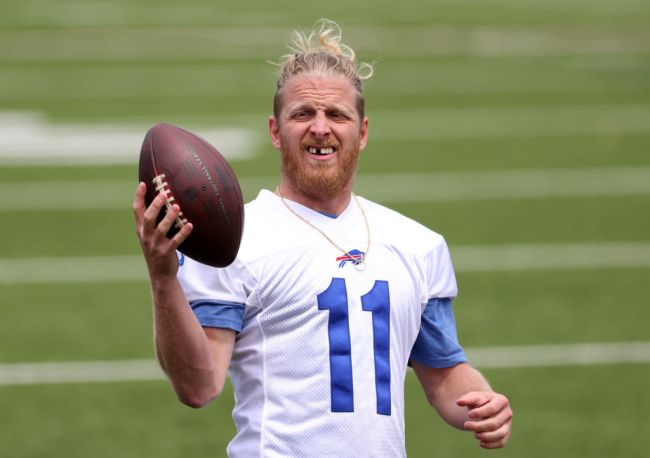 The NFL has put Cole Beasley on ice after the Bills receiver was deemed to be in contact with a team trainer who tested positive for COVID-19.

Beasley will spend the next five days at home, presumably reading the FDA-approval docs for the Pfizer vaccine to find evidence of the Illuminati, despite testing negative for the virus. The dismissal falls in accordance with the NFL’s commitment to making unvaccinated players lives tangibly more bothersome than their vaccinated counterparts.

Bills’ WR Cole Beasley was sent home from the team’s training facility for the next five days after being a close contact of a trainer who tested positive, as @PLeonardNYDN reported.

Unvaccinated players are mandated to stay away from the team for five days if they’ve been in close contact with someone who tested positive, whereas there are no restrictions on vaccinated players under the same circumstance. The NFL policies also include more frequent testing (daily for unvaxxed players, every two weeks for the vaxxed), masks and social distancing in the team facility and during team travel for unvaccinated players, ESPN reports.

More details: The Bills’ trainer who tested positive was fully vaccinated. Beasley was in close contact with him yesterday and tested negative for covid today, as did Gabe Davis and Star Lotulelei, who all were all sent home and all tested negative. https://t.co/APlxWWumsg

This is exactly the situation Beasley was railing against while reading a prepared statement during his press conference in late July.

“It’s common sense that if a vaxxed or unvaxxed player is tested less frequently, the likelihood of a player being pulled for COVID drops dramatically,” Beasley said.

Vaccine mandates feel icky to me, but at some point you have to trust that the government isn’t trying to kill us. And if not, you can’t shake your fists at a private corporation whose interest is to eliminate a virus that affects its bottom line. Consequences suck, but Cole Beasley needs the NFL a lot more than the NFL needs Cole Beasley.

So the trainer Cole Beasley was “in contact” with was vaccinated, Beasley himself tested negative for covid, and he still has to go home for five days? Sounds a lot like punishment for being unvaccinated rather than protocols to protect their health 🐸 ☕️

This is exactly type of situation Cole Beasley was fighting against all along.

League punishing unvaccinated players even as they test negative for COVID.

Should be interesting reaction he and others on #Bills have to this.