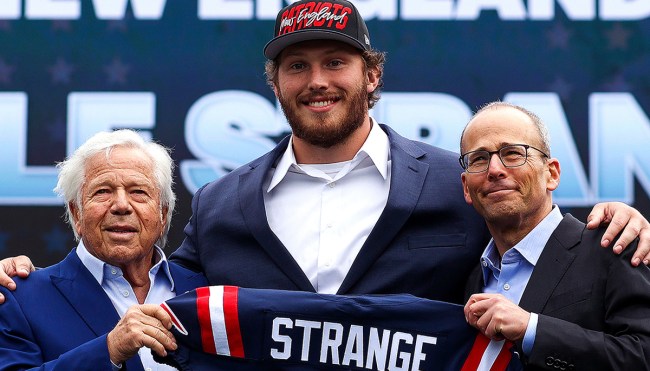 This year’s NFL Draft was one of the more unpredictable selection ceremonies in recent memory; heading into the first night, it seemed like it was going to be hard to be truly surprised by anything that unfolded over the course of the first round and beyond.

The biggest shock of the entire draft was probably the fact that Malik Willis—who accepted the invitation he received to attend the ceremony in Las Vegas thanks to the hype surrounding him—slid all the way to the third round before being selected by the Titans with the 89th pick.

However, the Patriots likely earned the silver medal thanks to what they did with their first-round selection, as it was hard not to wonder if Bill Belichick’s dog had somehow gone rogue and managed to lock in the 29th pick after the team opted to use it to secure the talents of Chattanooga guard Cole Strange (the most optimistic projections had him pegged as a third-rounder).

It would appear Strange was just as surprised as the vast majority of experts based on a great story shared by Mass Live. The former member of the Mocs (who thought he’d sneak into the second round) was watching the proceeding with his dad Greg, who said both of them were preparing to call it a night when Cole got a call from an unknown number.

The elder Strange recounted what went down after his son put the phone on speaker and was greeted by someone claiming to represent the Patriots, saying Cole thought it might be a prank call until a certain member of the organization hopped on the line:

“He said, ‘Sir, I don’t mean to be disrespectful at all, but I’ve gotta know because I’ve got some crazy friends. Is this a prank?’ The guy said, ‘Hold on just a second.’ And then Bill Belichick got on the phone and of course, unless you’ve been under a rock for the last 20 years, you know Bill Belichick’s voice.

As soon as I heard Bill Belichick’s voice, Cole and I both started screaming and hugging and acting crazy. Probably saying a bunch of inappropriate stuff. We were so excited. To his credit, you’ve gotta love the guy,

Belichick is sitting there and when we got through, the first break he had, he said, ‘Hey Cole, you’ve gotta act like you’ve been there, man.’ It was classic to us. We absolutely loved it.”