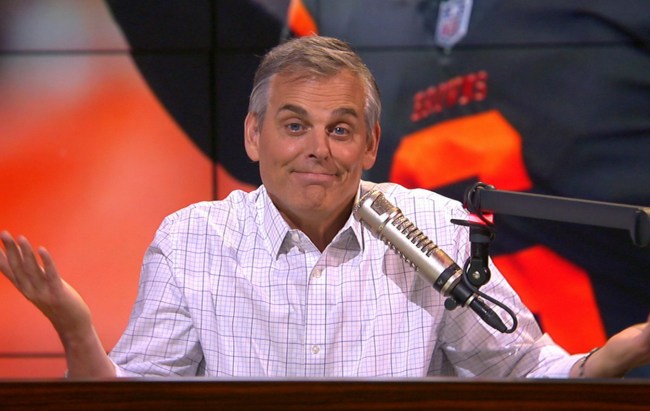 The biggest rumor of the NFL season came courtesy of Boomer Esiason and an anonymous source a week ago suggesting that Aaron Rodgers was planning to boycott the Super Bowl if the Packers played their way into the big game.

Esiason received a text from an anonymous number that was then read live on-air during ‘Boomer and Gio.’

“He will threaten the NFL by saying he won’t play in the big game or next season if they don’t eliminate some of the COVID-related rules,” Gio read from Esiason’s phone.

Rodgers was quick to jump on Twitter and blast Esiason after he shared the text, again, from a completely random number. He also called the idea of him boycotting the Super Bowl “the dumbest sh-t I’ve heard” during his weekly appearance on ‘The Pat McAfee Show.

Despite all of this, Colin Cowherd still has his tinfoil hat on. He seems to think that Rodgers himself, or someone in his camp, could be leaking this information to make certain people look bad.

Colin Cowherd Has A Conspiracy Theory

Cowherd came up with this grand theory because he too once received an anonymous text from someone shortly after he was bad-mouthing Rodgers. The text Cowherd says he received was very detailed and suggested Rodgers was leaving Green Bay.

“Is it possible that someone in Aaron Rodgers’ camp is trying to create, when criticism gets hot, a little misinformation campaign which he can use to validate the inaccuracy of the media,” Cowherd asked his listeners on his podcast.

Is Aaron Rodgers behind the "Super Bowl boycott" text?@ColinCowherd has a story that may back that up… pic.twitter.com/NB0jx3QRwi

Sure, it’s technically possible that Rodgers may be up to this grand scheme of trying to make certain media members look bad. But is it likely? Absolutely not.