Boomer Esiason Shares Wild Report About What Aaron Rodgers May Do If Packers Make The Super Bowl, Rodgers Responds 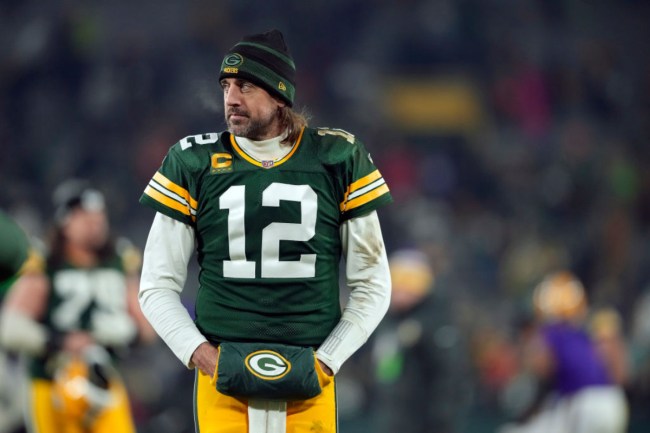 Aaron Rodgers has been the most talked about player in the NFL this season and whoever you say is second on that list isn’t even remotely close to Rodgers.

While some of the talk about Rodgers has been about his MVP-caliber play on the field, the majority of the headlines he’s created have of course come from things said or done away from the game of football.

Rodgers, outside of maybe Bills wide receiver Cole Beasley, has been the most outspoken NFL player when it comes to the virus, the vaccine, and protocols. He recently said he’s run out of f-cks to give, Rodgers has always seemed to have had that attitude, but he’s undoubtedly carried himself that way this season.

While there’s been more than enough drama involving Rodgers so far this season, this latest rumor from a source of Boomer Esiason trumps all.

During Friday’s edition of ‘Boomer and Gio,’ the former NFL quarterback shared some truly Earth-shattering information he received from a source he says he trusts.

This unnamed source – emphasis on source – claims that if the Packers were to make it to the Super Bowl, Rodgers would boycott the game in the week leading up to it.

Boomer Esiason received a text from a trusted source which indicates that Aaron Rodgers will threaten to boycott the Super Bowl, should the Packers make it that far.#GoPackGo pic.twitter.com/8ycIyJzqKN

Rodgers Could Boycott The Super Bowl To Send A Message

“He will threaten the NFL by saying he won’t play in the big game or next season if they don’t eliminate some of the COVID-related rules,” Gio read from Esiason’s phone. “One big one that upsets him the most is the testing of non-symptomatic players. He’s told Jordan Love to be ready.”

“Like you said, he’s got to make it first, but Super Bowl week will be set on fire. It will send [Roger] Godell in a frenzy navigating the situation.”

Rodgers has made it crystal clear that he doesn’t agree with nor appreciate how the league has handled the pandemic.

I would say there is an extremely low chance (0%) of this actually happening if the Packers were to make it to the Super Bowl. However, if Rodgers did boycott the game and refuse to play unless changes were made we would be witness to one of the most unbelievable moments in sports history.

It’s worth noting that throughout the season, and his career really, Rodgers has prophetically explained how much he loves football.

The idea of Rodgers boycotting the Super Bowl is downright absurd, but if the past couple of years have taught us anything, nothing is really all that absurd anymore.

UPDATE (5:45 PM EST): About four hours after the clip of Esiason made the rounds on Twitter, Rodgers responded.