Colin Cowherd: Belichick Wanted To Start Garoppolo Over Brady, May Be About Done In New England 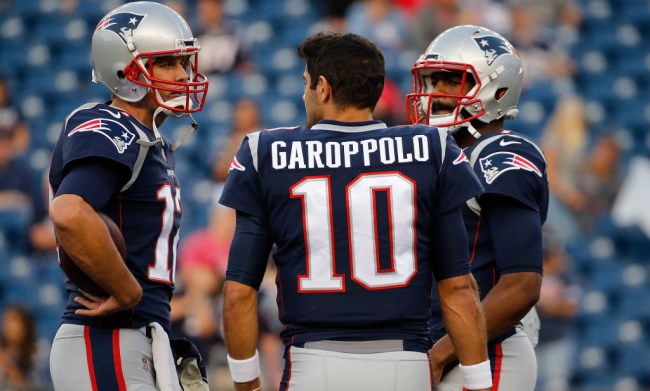 Colin Cowherd has been espousing a wild theory, that he says he has sourced, in which he claims Bill Belichick wanted to start Jimmy Garoppolo over Tom Brady at the start of the 2017 season, but Patriots owner Robert Kraft told him he couldn’t. And because of that interference from Kraft, Belichick may soon be leaving New England.

Now this theory of Cowherd’s isn’t new, he’s been saying it for a couple of weeks now…

.@ColinCowherd has a theory why the Patriots traded Jimmy G and Jacoby Brissett: "That [Robert Kraft] chose Brady over Belichick it ticked off Belichick and he got rid of the future." pic.twitter.com/k7dYyOI03i

This week, however, Cowherd added a new twist that involves Patriots coordinators Josh McDaniels and Matt Patricia, both of whom are expected to receive head coaching offers for the 2018 season.

“Bill Belichick has built this dynasty and for 15 years Bob Kraft, the owner, let him run the dynasty,” explained Cowherd. “Never got in the way of personnel decisions. Ever. And then in the last year – six months – Kraft stepped in. Because Belichick was going to start Garoppolo. Belichick was ready to move to Garoppolo. We have it sourced. He knew Garoppolo was gonna be great. And Bob Kraft said no.

Cowherd then surmises that Belichick has probably been making calls about McDaniels and Patricia promoting them as potential head coaches. Which, in turn, means that the Patriots will have lost Garoppolo, Brissett, McDaniels and Patricia… and Belichick, because Cowherd can’t see him sticking around with those losses and little plan for the future.

Crazy? Maybe, but it sure would help explain why Belichick gave away two young quarterbacks in Garoppolo and Brissett with so much potential for next to nothing when their current starting QB is 41-years-old.