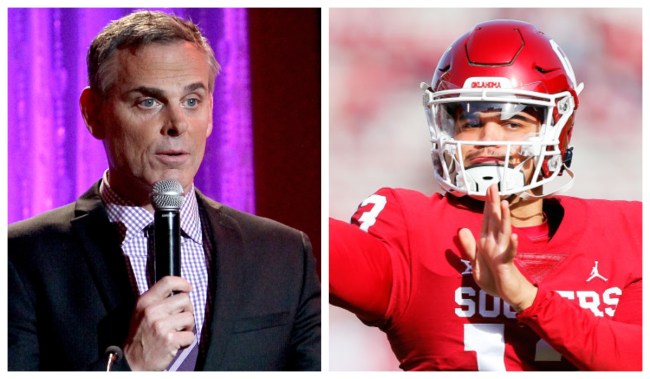 Caleb Williams is following Lincoln Riley to USC, officially. Everyone on planet Earth knew that Williams would be transferring to USC as soon as he put his name into the transfer portal. The Williams to Wisconsin rumors were just that, rumors, but that didn’t keep Colin Cowherd from reacting to the news like a schoolgirl opening her lunchbox to find an extra cookie inside.

Cowherd jumped on Twitter to post a video that began with him showing an article about Williams’ decision to join the Trojans. Then, when he turned the camera around, things went South, quick. He decided to do some really weird, horrible ‘evil laugh’ into the camera.

You can tell at the start of the video that he realizes he looks ridiculous doing the laugh with his mouth closed, so he then decides to show some teeth and things immediately went from bad to worse.

What is it with sports analysts posting horrendous selfie videos? First, it was Skip Bayless, and now Cowherd has put an entry into the worst selfie video hall of fame.

It’s worth noting that Cowherd did not go to USC, he’s a graduate of Eastern Washington. He’s a Los Angles guy now, however, so he’s obviously hoping USC can be relevant for the first time since 2008.

I get it though, I too get excited when certain players make their way to my favorite teams, but I also have the wherewithal to not post videos like Cowherd did.