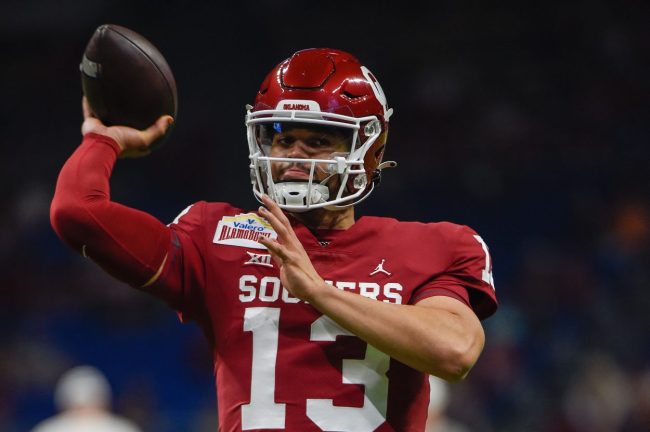 Caleb Williams made his college decision official on Tuesday morning and committed to the school that everyone expected. On November 28, 2021, former Oklahoma head coach Lincoln Riley left for USC and now Williams is joining him in Los Angeles.

Williams, a former five-star recruit, was a true freshman in 2021. After beginning the year as the backup to Spencer Rattler, he was thrust into the starting role during the first half of the Texas game and went on to lead the Sooners back from a 21-point deficit, the largest in Red River Shootout history.

From that point forward, Williams was QB1. And when Riley left, there was a lot of speculation that Williams would go with him.

And then, not long after Riley’s departure, Oklahoma hired Brent Venables as his replacement. At that point in time, Williams was still with the program and played in the Alamo Bowl under interim head coach Bob Stoops.

Venables was optimistic that Williams would return under the new staff. He was wrong.

On January 3rd, Williams hit the transfer portal. He said that his options were open and that a return to Norman was not out of the picture.

Shortly thereafter, the Sooners landed a commitment from Dillon Gabriel, which ruled out Williams’ return. Thus, the expectation was that he would head west to play for the Trojans.

With the new rules on Name, Image and Likeness, his recruitment also had an element of free agency.

Williams, being the superstar name that he is, has a lot of value in the NIL space. His recruitment immediately became an expensive bidding war, but he and his family maintained that money was not a factor. Instead, he was to commit to the school that gave him the best opportunity to prepare for the NFL and was rumored to be down to LSU, Wisconsin and USC.

He made it official with the Trojans on Tuesday, even though it has been done since the 15th.

Former OU QB Caleb Williams has signed with USC, per sources. Expect an announcement as soon as Monday.

According to multiple sources with direct knowledge, Caleb Williams has turned down Wisconsin and will acknowledge his silent commitment to USC with a public announcement "in the near future."

No matter what the reason is for his commitment, Riley and the Trojans instantly got better. Williams is a heck of a talent and played well in Riley’s system last fall.

He threw for 1,912 yards and 12 touchdowns with only four interceptions on a 64.5% completion clip and added 442 yards and six touchdowns on the ground. Those numbers came in only eight full games.

Needless to say, he is going to be under a massive spotlight in Los Angeles.

Now that the news is official, Oklahoma fans are super salty.

Caleb Williams officially going to USC. Ain’t that a bitch? TBOW has no morals or loyalty.

That was the longest time ever to make the dumbest decision of the year. I know there is no rational explanation but I want one none the less. #tbow #calebwilliams

Can’t blame the players but I can blame TBOW

I wanted to cheer for Caleb Williams wherever he landed, but I simply cannot and will not cheer for whatever dirty scheme @LincolnRiley is running #TBOW

I’m sitting on my hands Twitter. Lord, please help give me the discipline not to type what I’m thinking. Amen. #TBOW

Change your bio, you rat. Have fun with TBOW pic.twitter.com/b41qrZuMa0

Thinking I moved on from TBOW and the USC move.

Also me when I see USC news pop up on my feed (because I have no self control and keep interacting) pic.twitter.com/iRIXY6ay1u

I'd say @LincolnRiley is one shady piece of human trash, but that's not very fair to trash. #oudna #TBOW #BoomerSooner

I am a gentle, kind person by nature. TBOW stirs up some anger and frustration in me though. He knew what he was doing and screwed OU the whole year with a smile on his face. KARMA IS A BITCH.