Colin Cowherd Says You Can Find A Dozen Tim Tebow’s In Any Gym In America, Which Is Ridiculous 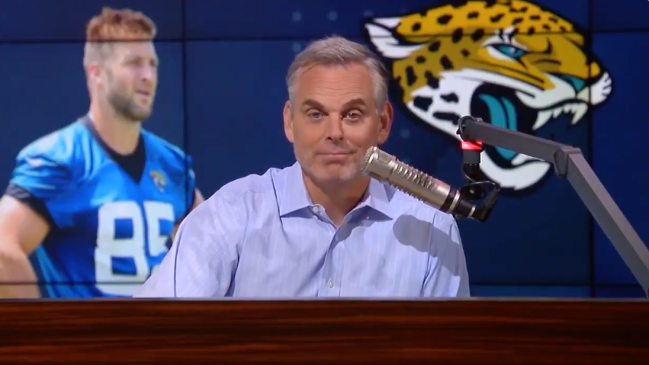 Based on his comments on Tuesday’s editions of ‘The Herd,’ nobody on the planet may have been more pleased to see Tim Tebow get cut by the Jacksonville Jaguars than Colin Cowherd.

Nobody with a brain thought Tebow was actually going to make the Jaguars’ final roster. If you listen to Cowherd’s five-minute plus segment of him patting himself on the back for correctly predicting that Tebow wouldn’t make the team in Jacksonville, you would think he was the only person on Earth that saw this coming.

Cowherd’s reaction shouldn’t come as a surprise, however, he gets paid to make long-winded statements like he did on Tuesday. He gets paid to stir the pot and create headlines, and he certainly checked both of those boxes by letting everyone know that his big brain knew that Tebow was eventually going to get cut.

Cowherd’s big message amid his evisceration of Tebow was claiming that he wasn’t ever good enough to be a pro athlete. Tebow played in 35 NFL games, won an NFL playoff game, and accounted for 19 touchdowns in his career. Non-professional athletes don’t do that.

Cowherd is 100% correct in saying that Tebow never had the ability to be a good pro athlete, that’s just a fact. The most mind-boggling statement Cowherd made, and perhaps has ever made in his career, came at the end of his ego-building exercise when he said “you can go into any Gold’s Gym in America and find a dozen Tim Tebow’s.”

You can hear Cowherd make his Gold’s Gym statement at the 4:10 mark below.

Cowherd isn’t being literal when he says local gyms are filled with a dozen Tebow’s, but he still said it. I can guarantee you that you can walk into your local gym and there will not be a Heisman Trophy winner in the building.

Congratulations to Cowherd for correctly predicting that Tebow was going to be cut by the Jaguars. According to multiple reports, Cowherd also believes that the sun will come up tomorrow and that water will continue to be wet.