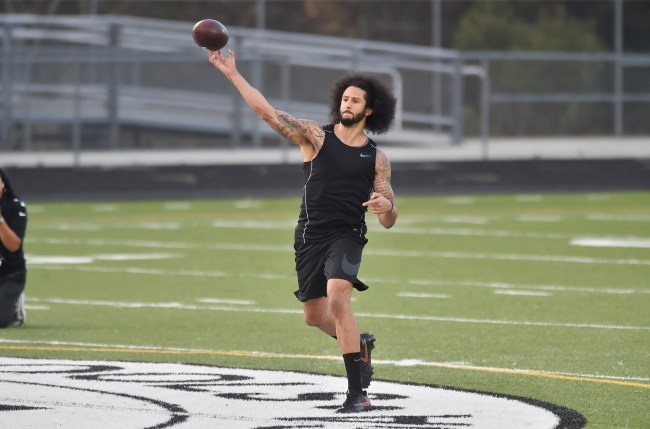 Colin Kaepernick’s workout on Saturday was a disaster that descended into chaos but it seems like a couple teams might still be interested in signing him.

Over the weekend, Kaepernick was involved in a dispute with the NFL over the workout because he wanted the media present and didn’t want to sign an “unusual” liability waiver.

Kaepernick eventually changed the location of the workout and held it in front of seven teams and several members of the media at a local Atlanta high school.

Kaepernick impressed one NFL team exec who said his arm talent was “elite” but other scouts weren’t as dazzled by Kaep’s workout but agreed that he was good enough to be on a roster.

Kaepernick’s lawyer Mark Geragos jumped on the Adam Carolla podcast on Tuesday to claim that two teams are interested in signing Kaepernick after the workout and that something could happen in the “next 10 days”.

I think you’re going to hear something in the next 10 days, there are two teams that I think are in the hunt, One team who is legitimately in need of a quarterback who had a very poor showing on Sunday and has got an owner that I don’t think gives a shit, and the other is an owner that does give a shit but is still in the hunt

Geragos has a history of making bold claims that haven’t come true so I would take his statements with a grain of salt.

Here is the list of the seven teams that went to Kaepernick’s workout if you want to try and figure which two teams might be interested in Kaep.