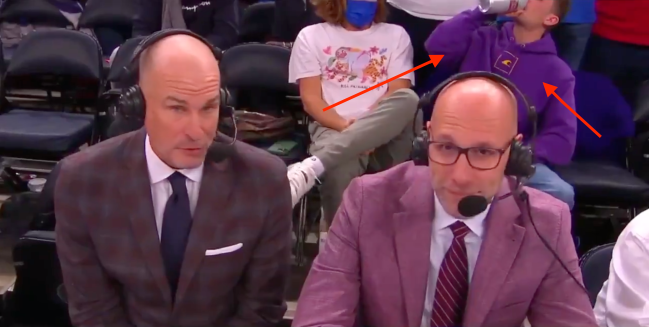 This college basketball fan is probably getting cooked in a group chat with his friends this morning. After getting front-row seats at Madison Square Garden, right behind ESPN’s broadcast team, he managed to embarrass himself on national television.

The college basketball season began on Tuesday evening, and as has become recent tradition, the opening night included the Champions Classic. Each year since 2011, Michigan State, Kentucky, Kansas and Duke rotate matchups between each other.

In most years, all four teams are ranked in the top 10, if not the top five. Both games are played at Madison Square Garden.

Fans were not in attendance for the Champions Classic in 2020, so when full capacity was allowed this year, the Garden was rocking. Right in the front row was two friends, one wearing a white shirt and one wearing a purple hoodie— neither looking particularly old.

When the game came back from commercial during the game, both of the fans were in full view.

Surely, in an effort to go viral, the purple-hoodied fan proceeded to chug his beer. It appears to be a Stella Artois tallboy.

However, after getting the drink down and choosing to trust a burp that he shouldn’t have, he went viral for a different reason. Some of the beer came right back up and he vomited all over himself, front and center on ESPN.

My man in the purple sweatshirt trusted a burp that he shouldn’t have. Oops 🤮pic.twitter.com/sQDfyvKFHz

Tough scene for the guy in the purple hoodie.