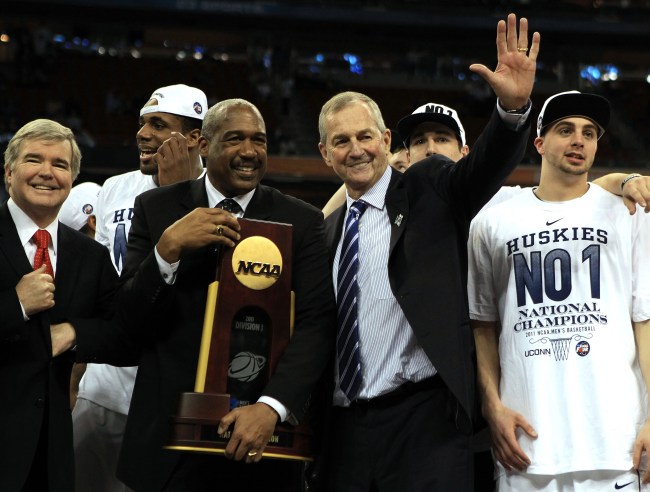 One of the greatest college basketball coaches of all-time is retiring. Jim Calhoun previously retired in 2012, bringing an end to his legendary tenure at UCONN, but he reversed course and decided to become the first head coach of a new D-3 basketball program.

Jim Calhoun is retiring. The 3-time national champion coach while at UConn is 79 years old and has been the head coach at D-3 Saint Joseph since 2018. One of the best to ever do it.

Now he is retiring again, seemingly for good this time, after leading the University of Saint Joseph to a 44-17 record in the first 2+ years of the program’s existence. Last year, he led the team to a 26-3 season and a spot in the NCAA Division III basketball tournament.

That storied career spanned 40 seasons in Division 1 with Calhoun leading Northeastern for 14 years, taking them to the NCAA tournament 5 times in his last 6 years before leaving for Connecticut. He spent 26 years at UCONN and put together one of the most successful careers the sport has ever seen.

During his time with the Huskies, Calhoun reached the NCAA tournament 18 times, won the Big East regular season title 10 times, won the Big East tournament 7 times, and won the NCAA title 3 times, including the memorable “Cardiac Kemba” run in 2011. He also won 625 games with UCONN to run his career total to 873 wins, which is good for 7th most wins in Division 1 history.

Calhoun’s retirement is effective immediately and he will be replaced by associate head coach, Glen Miller, who will take over a 2-2 USJ team. Calhoun battled a number of health issues throughout his career, but his retirement is luckily not health-related.

This retirement unfortunately won’t receive the same massive fanfare that Coach K is going to get this year, but Jim Calhoun will be missed just as much by the game of basketball.