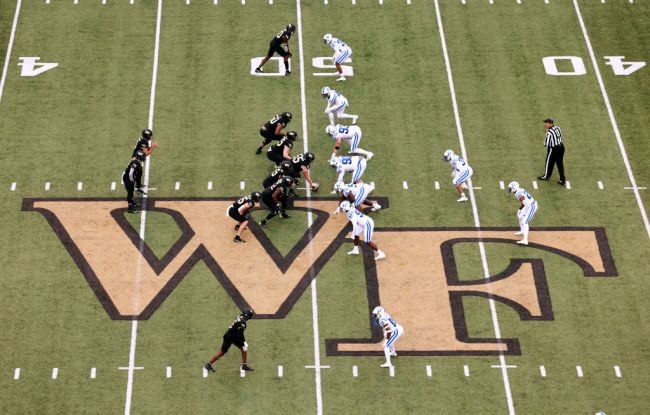 Wake Forest beat Duke 45-7 on Saturday to improve to 8-0 on the year. The game itself, as you can see from the score, was incredibly boring, but that doesn’t mean something incredible didn’t happen in Winston-Salem on Saturday night.

With the Demon Deacons up 35-0 in the third quarter, the broadcast decided to show a shot of the student section and what an incredible decision it was.

A guy and a girl were caught in heavy conversation, clearly flirting. The girl gives the guy the look, bats her eyes multiple times, and goes in for a kiss. The guy had different plans As she leaned in, he faced forward hitting her with one of the most ruthless rejections ever caught at a sporting event.

A simple (and brutal) rejected kiss seems to be the whole story here, but apparently, the clip doesn’t paint the full picture.

As the video went viral on social media over the weekend, the guy decided to address the situation head-on and shared his side of the story on a Reddit thread.

The Rejecter Tells His Side Of The Story

Basically, I’ve been talking to this girl for a while and we just started dating about a week ago. I tell her she should come to the Wake game since we are undefeated and will probably win. She says yes. We go with a group of friends, and we are having a great time.

Throughout the game we are flirting, hugging, kissing a little bit, etc. We also do this thing where one of us leans in for a kiss, and the other person leans away, which is an inside joke between the two of us. So, we do our little inside joke thing, and unbeknownst to us, we are being recorded.

After the game, I find I’m on the wake forest old row Instagram page, and within the hour I’m on the official old row page. Then, I’m on TikTok, Twitter, and apparently Reddit too.

Just to clarify a few things:

Anyway, the internet is full of horrible people and I haven’t done any work this weekend, so I’m gonna go do that now. Peace

So, long story short, the guy rejecting the girl’s kiss was just a form of flirting and the camera basically put him in a tough spot.

He jumped on TikTok to explain that he and the girl are dating as well. She posted a TikTok addressing the situation, too: