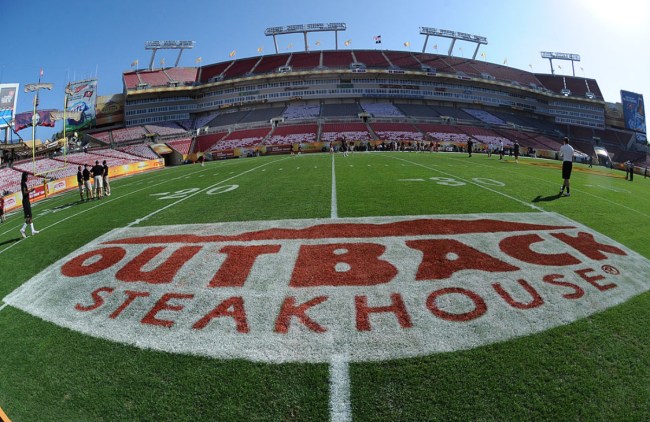 College football as we know it is no longer. No, it’s not because the NCAA is obsolete or because college athletes are finally being paid for their name, image, and likeness, but it’s because the Outback Bowl is dead.

The devastating news was delivered earlier this week that ReliaQuest is the new sponsor of the previously known Outback Bowl. Outback had moved on months ago, but this makes the change officially official.

ReliaQuest Bowl is the new name for the former Outback Bowl. Outback ended its title sponsorship & the bowl had been renamed the Tampa Bay Bowl for the past 3 months

Any college football fan would agree that the Outback Bowl was right up there with the Rose Bowl and Sugar Bowl when it comes to the most recognizable bowls on the oversaturated slate.

Winners getting comprehensive cybersecurity solutions is not as cool as getting a bloomin’ onion… https://t.co/DxlpUbNtx3

Let’s not be sad about the Outback Bowl ending. Let’s rejoice in the times we had, @colecubelic. https://t.co/95Ik9erYDH pic.twitter.com/8Y1INK2NuQ

This should be illegal. https://t.co/5aotViOW29

ReliaQuest made an enemy out of me today https://t.co/sd59gNiL0O

I'm torn. This is a horrible name for a bowl that will be worth mocking for a long time, which makes it a great name. At the same time, the Outback Bowl deserves so much better. https://t.co/624HZ3kvnv

It will always be the Outback Bowl in this house https://t.co/QvLa8DGy44

BUT THE BLOOMING ONION https://t.co/rJidPbwURP

It’s the Outback Bowl for me.