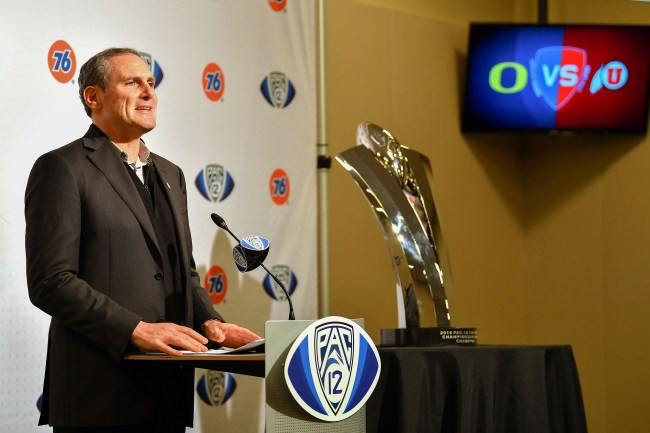 I’m not a pessimistic person, but I’ve got real doubts that the college football season will be played this year. Sure, I want the games to go forward without any hiccups, with teams capable of controlling this virus and avoiding infections and/or cancellation of games; I just don’t see it happening. Not when more student-athletes are speaking out about sitting out and demanding more protection from the NCAA, or when a school like UConn already pulls out of playing.

While my opinion honestly doesn’t matter — because it all comes down to one thing; money — there’s one conference that’s hoping to try and be safe and still make sure athletic programs aren’t losing out on millions of dollars should the college football season be cancelled. That would be the Pac-12, which, according to a Mercury News article, is working on a loan program near $1 billion that would help fund colleges from the lost revenue without football this fall.

Per the article, internal documents and conference sources show the Pac-12 considering the massive loan program, hoping to add an extra layer of protection to athletics programs that generate nearly $50 million dollars in ticket sales and media rights alone each season.

According to a series of emails obtained by the Hotline through public records requests, the loan would provide a maximum of $83 million for each university at a rate of 3.75 percent over 10 years.

Each athletic department could decide whether it wanted to participate in the program.

If all 12 opted for the maximum amount, the total would be $996 million.

“The conference is trying to be nimble and give schools some options,’’ a source said.

However, multiple sources indicated that not every school would make use of the loan, and some would seek substantially less than the maximum allowable. If the Pac-12 plays a full football season, the plan could be pushed aside entirely.

There are lots of moving parts to this reported loan program, but it seems like a wise idea for some of the Pac-12 schools to at least consider. The Mercury News piece mentions private universities like Stanford and USC “would be unlikely to participate in the program,” but that doesn’t mean public schools shouldn’t consider it. If it leads to recouping some lost revenue in case there’s no college football season in 2020, at least the money can be divvied up across multiple sports — which could save schools from cancelling other seasons that don’t bring in as much revenue.

Should the loan program be approved, because of the Pac-12’s media rights contracts with FOX Sports and ESPN worth $1.2 billion — which expire in 2024 — the responsibility for the loan wouldn’t start until then (four years from now), which gives any college that participates (seemingly) enough time to generate money to repay the debt. Still, there are lots of looming questions about this, but, hey, at least it’s something the conference is thinking about in order to protect schools from so much lost revenue should a college football season not be played.

With college football players in the Pac-12 doing what they can to get a slice of the pie, this may not sit well with them, but, for the good of their universities and the overall health of their school’s athletic programs, this near billion dollar loan does sound like a progressive step in the right direction.