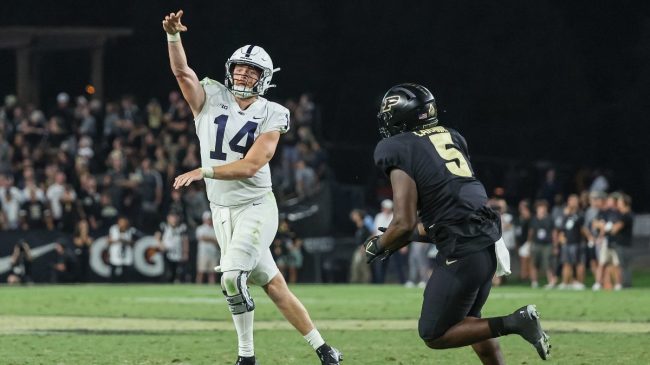 College football season is officially here as Thursday night’s matchup between the Penn State Nittany Lions and Purdue Boilermakers did not disappoint. The game went the distance and was a total roller coaster all evening. It was exactly what the fans were hoping to see as nobody can get enough of the bonkers ending to the game.

Penn State-Purdue Go Back And Forth In Heated Battle

PFF shared the clip of what turned out to be the game-winning touchdown. Sean Clifford had an up-and-down performance throughout the matchup. However, he pulled through for Penn State and marched the Nittany Lions down the field to win the game. It was a magnificent display of college football, as it provided the dramatics throughout.

It was such a fun matchup that fans couldn’t help themselves but go bananas afterward. Some of the reactions are hilarious and absurd. Let’s take a look at some of our favorite reactions from Thursday night’s college football matchup.

Usually, we see this later in the season, but Penn State students were just too hyped after the big win.

Nittany Lions fans were likely sweating bullets after Purdue scored that pick-six. Regardless, this college football fan is just happy with the win.

What a stressful first game lol but dang what a comeback! Especially after that pick 6. Way to bounce back Cliff!!

I feel the same way when I watch my Oregon Ducks.

I do love college football but I also love when I don’t have a heart attack. I’d rather watch other teams have a shootout lol

Even Micah Parsons was on the edge of his seat!

Damm penn state!! My heart can’t take games like that no more! But 1-0!

We couldn’t agree more. The final drive was everything you’d want in a nail-biting ending to a college football game!

That last offensive drive was a masterclass

Thursday night was a nice teaser for the upcoming weekend. Get ready, because there are a ton of fantastic matchups on Saturday that should have you on the edge of your seat like this one.