Augusta National Will Host College Gameday On Saturday Of The Masters 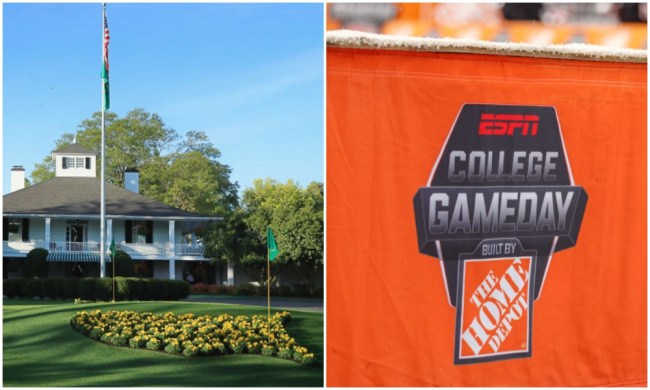 ESPN’s College Gameday is coming to Augusta National. There had been rumors that the show may pay a visit to the site of the Masters this November and on Tuesday those rumors became reality as Augusta National announced the show will air live from the course on Saturday, November 14.

One such way is the addition of College GameDay, which is scheduled to take place from 9 a.m. – Noon before the live CBS broadcast of the third round. The studio will be staged overlooking Ike’s Pond and the 9th green of the Par 3 course.

“When exploring ways to showcase a fall Masters, we were drawn to the concept of hosting College GameDay at Augusta National to introduce the Tournament to a new audience and provide even more anticipation and excitement to the event,” Ridley continued. “We appreciate the collaboration with ESPN, our longtime broadcast partner, for this first-of-its-kind opportunity.”

With this year’s Masters being pushed from its traditional timeslot in April to November and competing with both college football on Saturday and the NFL on that Sunday, mixing football and golf makes a lot of sense, especially for CBS.

You can’t help but tip your cap to both Augusta National and ESPN for capitalizing on such a unique situation with this year’s November Masters. All involved should benefit from this particular setting that may never present itself ever again.

On top of making the College Gameday announcement, Augusta National also announced that the annual Par 3 contest typically held on Wednesday has been canceled this year.