‘College Gameday’ Is Coming To New York City For Some Reason 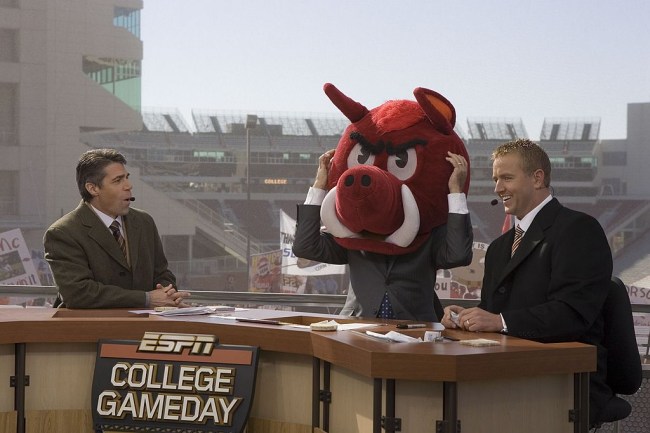 College football is filled with traditions, and while it might not be the most storied, College Gameday is one of the most prominent. It’s a weekly ritual in which college students wake up way too early and try to get drunk enough to have their buzz last for the entire broadcast in the hopes they get close enough to the stage for their attempt at a clever sign to make it on national television for a few seconds.

Oh, and Lee Corso normally puts something funny on his head. Laughs for days.

As you probably know, Gameday travels to a different school every week— usually based on the most compelling storyline ESPN can find— and it’s one of those things you should go to as a student if you get the chance (or, if you’re like me, plan on going to before getting too drunk the night before and realizing there’s no way you’re going to wake up early enough to get a good spot).

However, The Worldwide Leader decided to switch things up a little bit. The network just announced that this week’s episode will be held in New York City for the first time in its history, with the crew setting up camp in the middle of Times Square.

The decision comes as a curious one when you consider NYC isn’t home to a single football team of note (my apologies to Wagner and Columbia). However, ESPN exec Lee Fitting claims it’s the perfect setting, saying:

“New York City is a melting pot of college football fans and the heartbeat of America. Thousands of alumni gather in the city each fall Saturday to root on their school and we are bringing College GameDay to New York for them! We want every alumni base and college football fan near and far to join us in Times Square to provide the celebratory, festive atmosphere that is synonymous with the show.”

This logic would hold up if it wasn’t for the fact that essentially any alumni who live in the city avoid Times Square like an ex-girlfriend who also has the plague.

Will it attract hordes of tourists who will stand in the same place for hours on end for the chance to tell their friends back home they were on camera for a few seconds? Absolutely. But they won’t have funny signs, and isn’t that really what Gameday is all about?