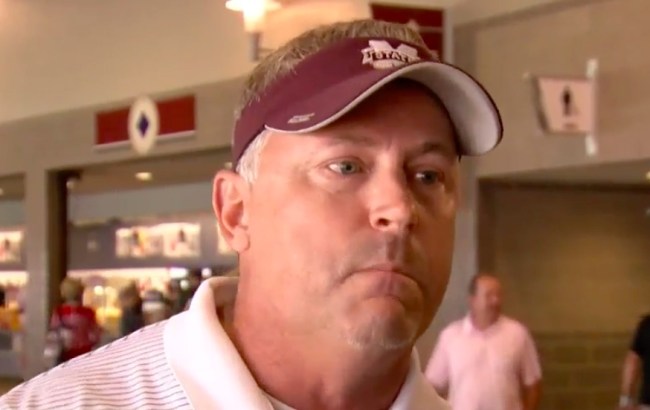 Last week, diehard college baseball fans— a group of people I swear actually exists— started flocking to Omaha for the College World Series, which as far as I know is the only reason anyone would ever willingly travel to Nebraska. One of those people was Terry Powell, a Mississippi State fan who made the trek to cheer on the Bulldogs in the tournament.

The NCAA tried to compensate for canceled games by scheduling a triple-header on Tuesday (although the final game was also rained out), which meant Powell had to wake up bright and early in order to watch his team take on North Carolina yesterday morning. After entering the stadium, he ran into a news crew from Omaha’s KMTV and decided to have a little fun, which resulted in one of the best videos I’ve seen on the internet in a while.

When asked about what he’s had to give up in order to make it to the CWS, Powell decided to have a little fun. In the immortal words of Stefon, this story has everything.

Y’all. This Mississippi State fan’s description of the sacrifices his family made so he could be in Omaha. You just have to listen. 😂 pic.twitter.com/4qCweFDxPS

I’m not sure if Powell has had this story in the back pocket for a while just waiting to unleash it upon the world or if he managed to come up with it on the spot, but if it’s the latter, he should probably quit whatever job he has and start looking into a career in the lucrative world of improv comedy.

The Big Lead noted his wife— who does not appear to actually have a boyfriend who sold a prosthetic leg on Craigslist— approved of the stunt.

I can only hope this isn’t the last time we hear from Terry Powell.