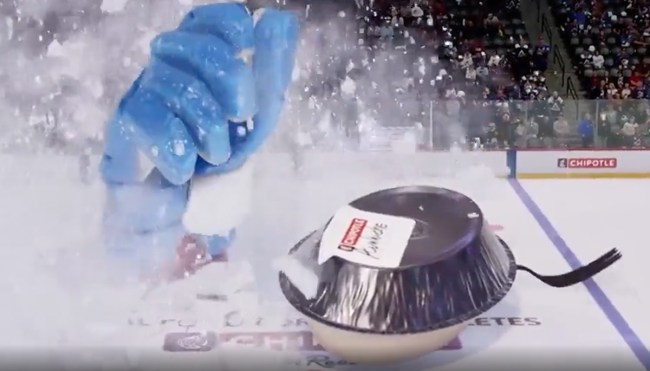 If you’ve gone to a professional hockey game at some point during the past decade or so, there’s a good chance you’ve had the chance to check out how teams have been able to harness the impressive technology that allows them to project some absolutely insane visuals onto the ice (which essentially serves as a giant screen).

The arenas home to the equipment that makes “projection image mapping” (or “video mapping”) possible are able to harness it in a wide variety of ways, like skewing the perspective to produce a 3D effect or creating a spectacle by allowing skaters to “react” to the events unfolding on the rink.

There are a number of different companies devoted to developing and perfecting that tech—including The Famous Group, which provided the world with a glimpse at what it’s been working on during the first game of the Stanley Cup Playoff showdown between the Blues and the Avalanche in Colorado on Tuesday night.

The peek came courtesy of a “mixed reality” stunt that was orchestrated in between periods. Fans who glanced at the Jumbotron got the chance to watch a virtual a Zamboni pushing a giant Chipotle burrito bowl into the middle of the rink before a giant hockey glove burst through the ice to drag it (and a fork) back into the eternal abyss from whence the hand came.

Burrito Bowl anyone?! We partnered with @ChipotleTweets, the @Avalanche and Turner Sports to create the first-ever @NHL Mixed Reality moment. This fun “break thru” sponsorship was rendered in real-time using the @UnrealEngine and @pixotope. You hungry yet? #GoAvsGo pic.twitter.com/fWfUorBJv5

It was certainly an impressive (albeit bizarre) demo, and it generated plenty of reactions from people who witnessed it

When you take a second gummy during intermission. https://t.co/vkQStdI3R3

Did the giant hand just do a T2?? pic.twitter.com/292fSdWqhq

Stick taps to the @Avalanche ice crew. Patching that Chipotle hole was no small feat

Whoever came up with that chipotle ad deserves a raise @Avalanche