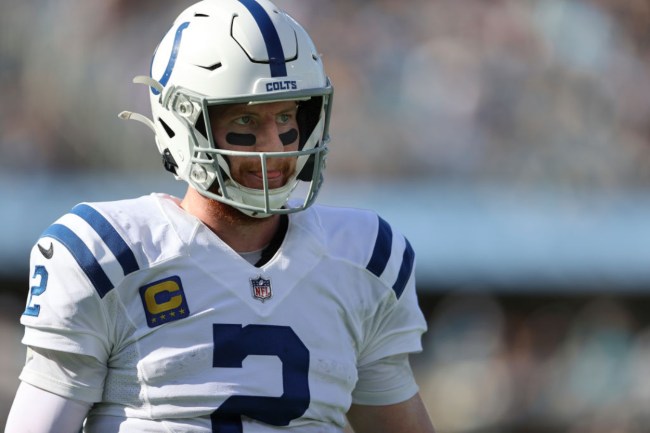 It’s been a bad week for Carson Wentz, to say the least. Not only did he and the Colts miss out on the playoffs by losing to the lowly Jaguars this past Sunday, but his head coach and general manager haven’t exactly been saying nice things about him either.

Earlier this week, Frank Reich wouldn’t commit to Wentz being the Colts’ starting QB next season.

While Reich’s comments are one thing, what GM Chris Ballard had to say about his future in Indy is another.

Ballard was asked if Wentz, who is signed through 2024, would be returning as the starting quarterback in 2022 and his comments were telling, to say the least. It’s safe to say Ballard’s stock on Wentz has dropped since the team acquired him.

“At the time (of the trade) we felt it was the right decision. I’m not going to make a comment on who is going to be here next year and who isn’t,” Ballard said, according to Zak Keefer of The Athletic. I thought Carson did some good things, and I thought there are some things he needs to do a lot better.”

Ballard also said that one of the messages he had for Wentz during their end-of-the-season meetings was “make the layups, just make the layups.”

It’s safe to say that the Colts are going to keep their eyes and ears open for any opportunity that presents itself for them to upgrade at the QB position. That will be music to some Colts’ fans ears, but others may want to see Wentz be given another full season as the starter.

The Colts do not hold a first-round pick at this moment in the 2022 NFL Draft, but perhaps they could make a move and acquire a QB at some point.