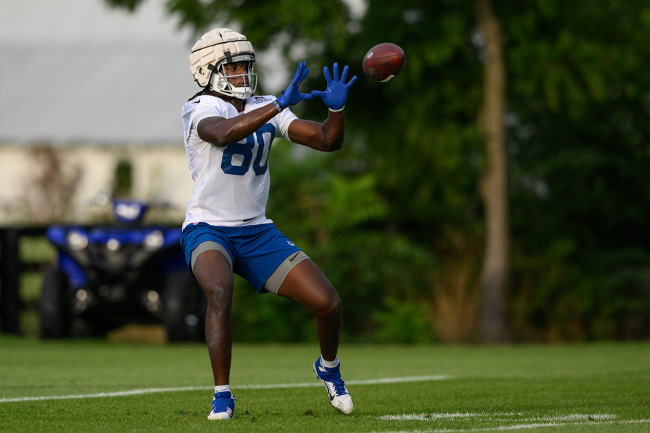 With the No. 73 overall pick in the third round of the 2022 NFL Draft, the Indianapolis Colts selected tight end Jelani Woods out of Virginia. It was a high-upside pick for a team that is trying to take the next step toward winning a Super Bowl.

Woods will take some time to develop and adjust on the next level, but he has the intangibles. He is absolutely massive.

Woods began his career at Oklahoma State as a three-star, pro-style quarterback before moving to tight end as a redshirt freshman. So he has only been playing the position full-time since 2018.

After just seven catches in his first season as a tight end, Woods was an All-Big 12 honorable mention as a sophomore and junior before transferring to Virginia. In his one year with the Hoos, he caught 44 passes for 598 yards and eight touchdowns and was named a First-Team All-ACC player.

2022 was something of a coming out party for Woods as a tight end and the Colts liked what they saw. He is a freak athlete with nowhere to go but up as he learns the nuances of the game from a different position on the next level.

In the meantime, he is turning heads at training camp. Not necessarily because of his play, but because he is a truly monstrous human. He makes 6-foot-4 Matt Ryan and 6-foot-5 starting tight end Mo Alie-Cox look small.

Jelani Woods is a cyborg what in the world. #Colts pic.twitter.com/FWtKBciivU

If Woods can continue to grow as a tight end and become a legitimate weapon in the passing game and as a blocker, he is going to be hard to stop.