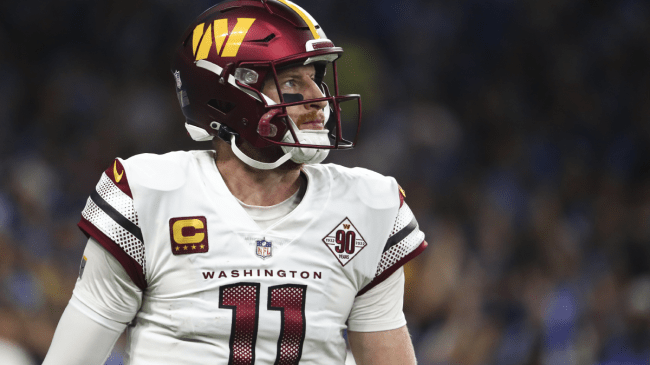 The Washington Commanders picked up quarterback Carson Wentz this offseason in a trade with the Colts. That deal came with a ton of drama as Indianapolis management went on to bash the passer following his parting with the team.

Washington, however, welcomed the signal caller with open arms. Despite the off-field concerns, head coach Ron Rivera supported Wentz throughout the summer, saying the narrative written about him was unfair.

But now, some of that offseason support is being questioned. Adam Schefter is reporting that Wentz wasn’t even the Commanders’ first choice on the QB market. A deal for Jimmy Garoppolo apparently fell through, forcing Washington’s hand with Wentz.

The Commanders reportedly had a deal done with the 49ers to send Jimmy G to Washington. Unfortunately, his decision to get offseason shoulder surgery caused the Commanders to pull out.

The San Francisco 49ers had the parameters of a trade agreement in place that would have sent Jimmy Garoppolo to the Washington Commanders at this year’s NFL scouting combine, but the deal fell apart once the quarterback decided to have shoulder surgery, sources told ESPN.

The deal would have involved multiple draft picks, sources said, but was disrupted by the surgery to Garoppolo’s throwing shoulder, which prompted the Commanders to move on from their talks with the Niners and trade two third-round picks and a fourth-round pick to the Indianapolis Colts for Carson Wentz.

With that news going public on Sunday morning, many have been quick to troll Wentz for not having been the first choice of his new team.

Check out the immediate reaction on social media.

One fan said, “Yikes, hit to the pride of Carson. Wasn’t even their first choice.”

Yikes hit to the pride for Carson. Wasn’t even their first choice 🤣

Another quipped, “Commanders are already sick of Wentz.”

Commanders are already sick of Wentz

This NFL viewer joked that the Washington deal was the reason for Garoppolo getting that offseason shoulder surgery, saying “Dude would have rather had shoulder surgery than go to Washington, I completely understand.”

Dude would have rather had shoulder surgery than go to Washington, I completely understand.

The 49ers are probably happy the deal fell through after seeing starter Trey Lance go down with a season-ending injury in Week 2. The Commanders missed out on Jimmy G, but they’re hoping Wentz will be the answer in Washington.